Nephrologist advises health workers to get vaccinated against Hepatitis 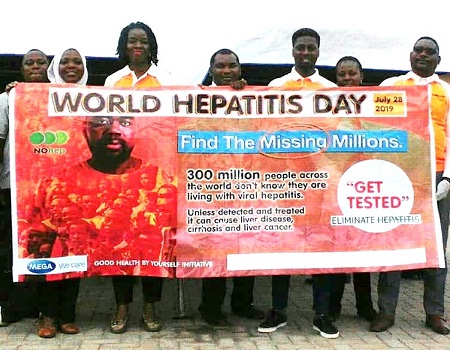 A Consultant Nephrologist, Dr Oluwayemisi Ajiyan, on Tuesday in Lagos, urged health workers to be screened and vaccinated in order not to contact Hepatitis Infection from an infected person.

The News Agency of Nigeria (NAN) reports that the World Hepatitis Day is a UN observance day celebrated annually on July 28, to raise global awareness about the disease.

The theme of this year is: “Eliminate Hepatitis: Finding the Missing Millions.’’

Hepatitis is an inflammatory condition of the liver, commonly caused by a viral infection but there are other possible causes such as autoimmune hepatitis and hepatitis that occur as a secondary result of medications, drugs, toxins and alcohol.

There are five common types of the disease, namely: Hepatitis A, B, C, D and E.

Hepatitis A can be spread through infected faeces, poor sanitation and certain sex practices, while Hepatitis B can be spread via exposure to infected blood, semen or other bodily fluids.

Hepatitis C is usually transmitted through exposure to infected blood.

According to the Nephrologist, Hepatitis infection has become a major silent killer than Human Immuned Virus, making everyone susceptible to the virus, following exposure from as little as a drop of sweat from infected victims.

‘’Blood infected by hepatitis can be viral for six months after extraction, hence, it is imperative that you consider screening as a paramount course of treatment,’’ she said.

The specialist also said that Hepatitis was an inflammatory condition of the liver, which could lead to its total damage as well as the kidneys if left untreated.

She expressed disappointment that many people suffering the diseases did not know they were sufferers.

‘’The World Health Organisation reveals that 325 million people are living with viral hepatitis B and C, while over 2.8 million became infected with the virus in 2017.

“After Tuberculosis, Hepatitis is the second major killer infection as it is contacted through prolonging sweat of an infected person, sexual intercourse with an infected partner, unsterilised objects and mother to child,’’ Ajiyan said.

She noted that the symptoms might be mild or non-existent fatigue, dark urine, pale stool, abdominal pains, loss of appetite, weight loss, yellow skin and eyes, which could depict jaundice.

The specialist noted that there were recent arrangements to incorporate Hepatitis vaccines into newborn immunisation packages.

She, however, advised parents to immunise children who were above 10 years of age, against the disease.

Ajiyan urged people to know their status, get screened and be immunised to stay free from the disease, says early detection is key to survival.

Nigeria to reduce Hepatitis B in children to 2% ― Minister

Vaccine, best form of prevention against Hepatitis A ― Expert