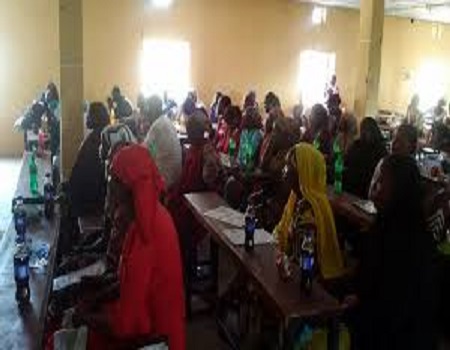 The National Directorate of Employment (NDE) in Rivers state has charged intending trainees of its Sustainable Agricultural Development Scheme to embrace crop farming and animal husbandry as a source of employment and financial empowerment.

Giving the charge in Port Harcourt during the launch of the training programme, the Director General of the NDE, Dr Nasir Mohammed Agungun said that the programme was in line with the Federal Government policy on agriculture for employment wealth creation and food sufficiency.

Represented by Chimaobi Eleleme, the Director General stated: “For a car to move, you need to fuel it, just as we human fill our tanks with food, we must farm”.

“Sustainable agriculture refers to an agricultural production and distribution system which helps to provide more profitable farm income, promote environmental stewardship and enhance the quality of life of farm families and communities”, he added.

In his remarks, the Rivers State Coordinator of the NDE,  Felix Kpegasin said the scheme was for the training of interested unemployed persons in agricultural skills mainly on crop production and animal husbandry.

He added that at the end of the 3 months training, it is expected that they can start on their own with little assistance.

“So it’s expected that the multiplier effect of each of these persons is supposed to key into this food sufficiency which the federal government has as one of its key objectives”.

He told the trainees that realising the importance of agriculture and its potential as a source of wealth creation, “I have taken to farming”

In his goodwill message, Owunaro Henry, Rivers State Director, Federal Character Commission and Head of the Association of Heads of Federal Establishments in Rivers state pointed trainees to the limitless opportunities abounding in crop production and animal husbandry.

He said with the new Federal Government policy to boost food production in the country and with the current closure of the nation’s land borders opportunities abound for those who would take to farming to move from the unemployed to employers of labour adding that that was an expectation of the NDE from the trainees.

He said that the training would enable them to take farming beyond the subsistence to the commercial levels adding “the Federal Government wants to ensure that any food we can produce in Nigeria, we don’t have to import it”.

Assuring them of a ready market for their produce, Owunaro said; “No amount of food you people that people would not buy it up”, saying that Nigeria with a population of about 200-million people was a huge market for farm produce.

Environmentalists urge FG to outlaw bush burning to save ecosystem