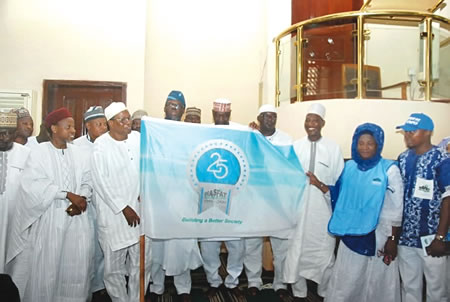 As part of activities marking its silver jubilee, a foremost Islamic prayer group, Nasrul Lahi-L-Fatih Society (NASFAT), has concluded arrangements to lend financial support to its members across all branches.

This was announced by the chairman of the anniversary planning committee, Alhaji Taofeek Adeseun, at the Lagos State Secretariat Mosque, Alausa, Ikeja, where prayer was also held for the peace, unity and progress of the country.

Speaking on the activities lined up for the celebration, Adeseun said a medical outreach and 2.5km walk would be held to show that Islam is not a sedentary religion.

He said: “With the walk, we intend to check sedentary way of life. Our five daily prayers and walking to the mosque are natural ways of building exercise in your daily routine.

“There is also going to be a medical outreach to cater for both young and old. This will be held simultaneously and it will coordinated by the national health secretary across all the branches.

Adeseun briefed journalists on a two-year ‘strategic plan’ with the acronym ‘HELD’ (Health, Education, Livelihood and Da’wah which he said was designed to create enlightenment, moral uprightness and drive technological innovation among the youths.

He disclosed that under the plan, essay competition would be held for NASFAT youths at the secondary and undergraduate levels with $10,000 as the cash prize.

NASFAT Deputy Chief Missioner, Imam AbdulLateef Muhammad Bello, described the journey of the organisation in the last 25 years as spirit-filled and fantastic.

He said: “Our impact as a religious organisation has been immeasurable because NASFAT is a detribalised organisation that accommodates all and sundry, including non-Muslims.

“We recognise the need for religious tolerance, which is why for the past few years, our international conference has focused on peaceful co-existence among different groups in a multi-religious society. For us at NASFAT, we believe we don’t need to fight ourselves. Insecurity has no religion.” With over 350 branches across the country and beyond, according to the organisation’s Publicity Secretary, AbdulAkeem Yusuf, Allah has given NASFAT the grace to celebrate 25 years as a foremost da’wah organisation.

He said: “The purpose of our celebration is to give praise to Allah for His grace on the society, His protection on NASFAT members and on the country as a whole.”

Speaking on the anniversary’s theme, Yusuf said: “The theme of the 25th anniversary celebration is ‘Building a Better Society’. And as we know, the primary yardstick for building a better society is peace; peace among ourselves both in our religious and social lives.

“There are also going to be lectures to be delivered by the Minister of Interior, Mr Rauf Aregbesola and the Kaduna State governor, Malam Nasir el-Rufai, in Lagos and Abuja, respectively. A third one will be delivered in Port Harcourt (Rivers State).”