My husband impregnated my sister, sleeps with our daughters —wife tells court 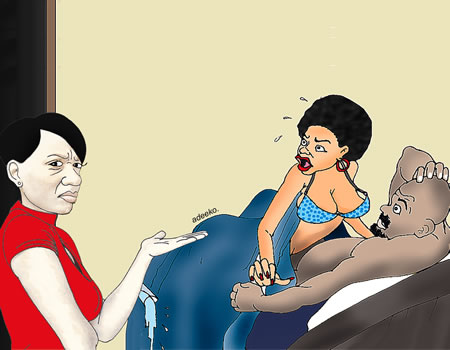 A 63- year-old businesswoman, Mrs Mabel Alli, has prayed an Igando Customary Court in Lagos, Lagos State to end her 41-year-old marriage to her husband, Richard, alleging that he sleeps with their daughters and has impregnated her sister.

According to the News Agency of News (NAN), she told the court that her husband sexually molested all their three daughters and was a womaniser.

“After impregnating my sister, he took one of our daughters to the hospital for an abortion.

“My 13-year-old girl also reported to me that he always sneaks into her room to have intercourse with her.

“I have caught my husband red handed on top of our third daughter. My friends and domestic staff are not exempted, I have caught him with them too,” the petitioner alleged.

The petitioner said that her husband was fetish and also wanted to use her for money ritual in order to finance his political ambition.

“He has taken me to various herbalists in Badagry, Sango and other places for money ritual; I followed him because he said it was for goodwill.

“I stopped following him to herbalists when the last herbalist he took me to asked me to come alone the following day but I went with one of our daughters.

“He told me that I should stop following my husband about and should run for my life as he wanted to use me for ritual or make me mad, so he can inherit my properties which include cars and houses.

“My husband collects money from me using charms, spent it on his political ambition but he eventually lost the election.

Mabel alleged that her husband does not take care of the children.

“I beg the court to terminate this union. I am no longer interested because my husband wants to kill me,  “she told the court.

However, Richard, who denied all the allegations, welcomed the divorce suit, saying he too was no longer interested in their marriage.

He claimed that he was the source of his wife’s wealth.

After listening to the estranged couple, the court president, Mr  Adeniyi Koledoye, adjourned the case till May 2, for judgment.