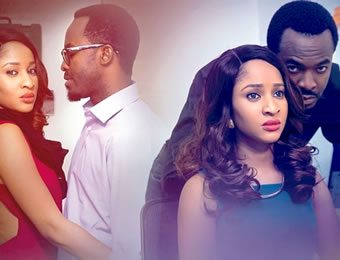 The movie is centred around a young CEO man and a lady who work with a software company, interwoven in a story of love and rape which called for an arbitration.

The film, however, deviated from the typical female rape story to  unravel the mystery behind a young CEO who was about to lose his company over a rape allegation by Dara ( Adesua Etomi) who  was his most brilliant and productive worker and mistress.

Shot on a small set of an office which was directed by filmmaker, Niyi Akomolayan, viewers are thrown into a state of confusion with different sides of the story told by both parties. The arbitrator in the person of Sola Fosudo, was chosen to preside over the issue and eventually got to the root of the matter, with the input of the bold Lawyer, Ireti Doyle.Although With Dara claiming that she was raped, the filmmaker could not hide the fact that she was not saying the truth because of the visible chemistry between the duo (Adesua Etomi and OC Ukeje), which kept the cinema audience whispering in hushed tones, ‘it’s a lie, she obviously wanted to sleep with him”.

At some point, Dara (Adesua Etomi) confesses that she slept with him to protect her shares and all that she had worked for, which was about to be taken from her by her boss,  Gbenga Sanni (OC Ukeje). This depicts the nature of human relations, as one will do anything  to survive a meltdown when he or she sees it coming.

The filmmaker however did well to introduce another twist when a former secretary who got pregnant  for Mr Sanni died . Then came the brilliant Chijioke (Gregory Ojiefua), a deputy manager of a software company to testify against OC Ukeje, although he was faulted for being in love with Adesua Etomi, and viewers where confused about his character, “comical or geeky?

The sound quality was impressive as well as continuity although the focus at some point was blurry. The performances of most of the characters where stellar, while the script surely depicted that the filmmaker had a sound and brilliant background of Law.