•As Delta govt wades in 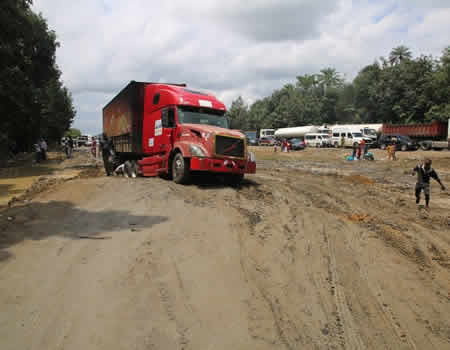 Share
For over a month now, tears and sorrows have been the lot of users of the ever-busy dual carriage Benin – Warri expressway over some failed portions between Sapele and Warri.

In spite of the hues and cries in the media over the untold hardship, motorists are daily going through in the hands of hoodlums and men of the underworld, there appears a stalemate from both the federal government, who owns the road, and the Delta State government.

The expressway is of immense economic importance to the country as it links the major oil-producing states of Edo, Delta, Bayelsa and Port Harcourt.

On a daily basis, the experience is harrowing as motorists are subjected to paddling through gullies and pools of muddy waters while articulated trucks break down and block other vehicles from navigating through.

It will be recalled that the government has, in the past, engaged in palliative measures in fixing the bad portions of the road, but these have not helped the condition as it has kept depreciating.

Motorists now suffer untold hardship over the deplorable state of the road as mobility has become a nightmare and has brought economic activities to a standstill.

Overtime also, there are records of untimely deaths of innocent commuters through avoidable accidents and poor productivity due to loss of manhour on a daily basis.

The situation is made worse since the rains started as cars breakdown and heavy-duty trucks overturn or get stuck in the mud, spilling their contents everywhere.

In some cases, motorists disembark at very terrible sections of the roads, amid gridlock, to push rickety and articulated vehicles to wade through the bad portions.

In other cases, due to the appalling state of the road, when going to Warri from Benin, motorists have to switch lanes when approaching the bad spots by taking a detour through Adeje community.

TribuneOnline had reported last week that hoodlums had begun to forcefully stop vehicles at the Adeje road to part with N1,000 each to access Warri or be clubbed.

A peace advocate and solicitor of the Supreme Court of Nigeria, Chief Robinson Ariyo, who is a regular user of the road, in a chat, described the harrowing situation as “completely unbearable.”

“Such a road so critical to the Federal Government, which links four Niger Delta states, shouldn’t be left in that sorry state.

“It’s a federal road, but there’s a way state governments fix such roads and recoup the money expended back from the FG.

“Governor Okowa should do some palliative work on it in the meantime before hoodlums begin to make a piecemeal of motorists in that road at night,” the Itsekiri chief pleaded.

Meanwhile, the Delta State Government on Wednesday pledged to intervene in the deplorable state of the Benin-Warri section of the East-West Highway.

This came from the State Commissioners for Information and Works, Mr Charles Aniagwu and Chief James Augoye who visited some bad portions of Federal Roads in the state.

They said in spite of being a federal road, the government’s intervention on the failed sections of the Warri-Sapele-Benin road to reduce the sufferings of the road users who cut across ethnic, political and religious divides, was necessary.