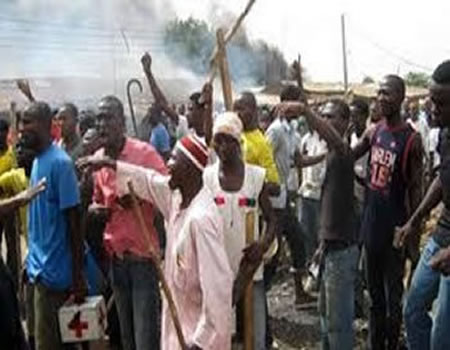 The controversy surrounding the alleged invasion of Tangaza Local Government Area of Sokoto State by suspected armed bandits who were said to be imposing levies on residents in the area may not end soon.

Though the Nigeria Police have debunked the alleged invasion, saying the persons claimed to be armed bandits were herdsmen from Mali, one of the residents told Sunday Tribune that the fear of the community is real and that their community was indeed invaded by the armed religious gangs.

According to Alhaji Aminu Dikko Tangaza, the armed group was invited by leaders of the communities few months ago for security reasons.

Dikko disclosed that only a few members of the group were actually invited for security purpose, but they later mobilised other members of their group to terrorise and introduce strange laws in the communities.

The Chief Imam of Gudu Local Government, who also doubles as the Ward Head of Marake, confirmed the presence of the said armed herdsmen, but said they had since left the town. He, however, declined to explain further if indeed they were collecting illegal levies and forcing residents to learn strange doctrines.

According to the Imam, “the herdsmen together with their cows, camels and donkeys and families started leaving on Monday and as of Tuesday had left completely.

Redesign Policy: Why Nigerians must bear with CBN – Peter Obi

“We actually held meetings with the Divisional Police Officer here on Thursday, where we were able to arrive at a reasonable conclusion,” he explained.

Secretary of Gudu Local Governmennt, Alhaji Bello Marafa Balle, corroborated the statement of the Chief Imam. He confirmed that the said armed herdsmen had left the community since Tuesday.

But addressing members of press on Saturday, Sokoto State Police Commissioner, Mr Murtala Usman Mani, dismissed the report of any insurgent in Tangaza or any part of the local government.

Cordelia explained that the commissioner of police was physically present in Tangaza on Friday for on the spot assessment of the situation alongside his team.

According to the PPRO, “the news of the presence of the herdsmen suspected to be Malians and armed known as LAKURAWA, have been doing the rounds lately. They were sighted around Marake forest in Gudu Local Governmennt Area and Wassaniya, Tunigara, Moliava, Jinai Jinai village in Tangaza Local Government of Sokoto State. The said herdsmen are lightskinned, speak Arabic and Fulfude languages with close to 3,000 cattle, apparently looking for greener pastures.

“The herdsmen are reasonably believed to be Malians and reside in a forest in Niger Republic sharing border with Gudu and Tangaza Local Governmennt of Sokoto State, and they come to the area largely owing to availability of waters for their animals.

“These herdsmen according to intelligence reports gathered from competent authorities of the area are annual visitors to the nearby forest bordering the two local government areas with their cattle which has increased from the initial 500-700 to about 3000 now.

“Intelligence further revealed that the said herdsmen usually stay in the forest in Niger Republic whenever they embark on such annual migration but occasionally enter the villages of Gudu and Tangaza LGA to procure food and other essentials and retire back to the forest in the said neighbouring country.

“The apprehension of the villagers stems largely from the activities of the armed bandits in Zamfara State and needs to be proactive with information of such nature, particularly now that the Inspector General of Police has graciously constituted a very strong team comprising of PMF personnel making it very difficult for the bandits to hibernate in Zamfara forest,” she explained.

Redesign Policy: Why Nigerians must bear with CBN – Peter Obi