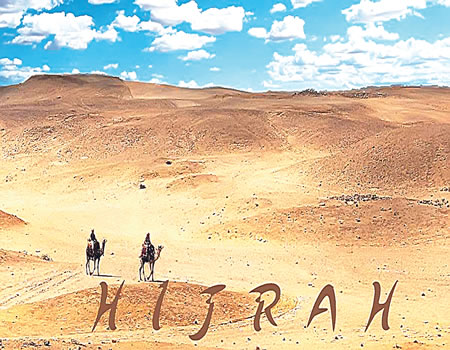 THE Muslim Media Practitioners of Nigeria (MMPN) has congratulated Muslims and non-Muslims alike on witnessing another new Islamic year, Hijrah 1442 AH, and urged them to reflect on their deeds and activities during the past year.

The national president of the organisation, Alhaji Abdur-Rahman Balogun, who conveyed the felicitations in a message signed by him, asked Muslims to use the opportunity of the start of a new year to renew their commitment to God and prayed Allah to end the scourge of the COVID-19 pandemic around the world.

He implored Muslims to rededicate themselves to the cause of building an egalitarian society and join hands with other Nigerians in moving the nation forward.

He described the wave of attacks on innocent Nigerians by insurgent groups as un-Islamic and pleaded with the concerned groups to stop their violence and embrace peace.

Balogun equally called for a stringent legislation against rape in the country, saying the crime was becoming too rampant because perpetrators always get away with it.

He reiterated the group’s call on the federal and state governments to declare Muharram 1, the first day of the Islamic calendar, as a public holiday.

He said such a declaration would be in line with the rule of law, fairness and justice to Muslims in the country.

This gesture, he stressed, would give Muslims a sense of belonging in the polity.

Muharram 1 is Islam’s equivalent of January 1, which is observed as a public holiday in Nigeria. Muslims worldwide have just ushered in the new Islamic year, Hijrah 1442 AH.

He implored government at various levels to recognise the Hijrah calendar and use it side by side with the Gregorian calendar.

Meanwhile, the organisation has described the death of Malam Abdullahi Wada Maida, the chairman of the News Agency of Nigeria (NAN) governing board, as an exit of a humane and detribalised media giant.

In a condolence message to the NAN family, the MMPN said the death of Malam Wada on Monday night would create a big vacuum in the media industry.

According to Alhaji Balogun, Malam Wada spent almost 50 years of his life contributing to the growth of the media industry.

He said: “This is one man who passed through all the stages of the journalism practice as reporter, correspondent, editor, editor-in-chief, managing director, publisher, press secretary and head of many media institutions.

“I remember how he gave the MMPN the board room of NAN during the inaugural meeting of the association in 2002 and gave us necessary support to grow.

“Also, as one of the longest-serving editors-in-chief and managing directors in NAN, spanning 18 years, Malam Wada displayed a high level of patriotism through his recruitment policy which was in tune with the Federal Character.

“All these must have accounted for the tumultuous crowd that witnessed his janazah prayers in Abuja on Tuesday as people came from all walks of life to pay their last respects, irrespective of religion and tribe.

“We pray Allah to forgive his shortcomings, console his family and friends as well all media associates and reward him with Al-Janah Firdaus.”

More Shocks As Unemployment Data Exposes Misery Status Of Nigerians
BEFORE now, economic and finance experts found it difficult to assess the healthy nature of the labour market and how to measure the impact of government policies targeted at creating jobs because of lack of real time labour data. But on Friday, August 14, 2020, the concerns were only slightly eased as the National Bureau of Statistics (NBS) published second quarter (Q2):2020 labour statistics, the first report since Q3:2018…MMPN congratulates Muslims MMPN congratulates Muslims

MONDAY LINES: Obasanjo’s (D)Art Of Condolence
Ben Guriano of The Washington Post described them in 2018 as ‘taboo enforcers.’ These are trolls seeking to upend truth and subvert facts about the life and times of the dead. ‘Do not speak ill of the dead’ came originally from a Spartan philosopher, then it was latinated by the Romans to read De mortuis nihil nisi bonum – and got spread around the world like Chinese viruses. The black man, as in all cases, contracted the no-no and turned it into a religion, got drunk with it and won’t mind killing for it…MMPN congratulates Muslims MMPN congratulates Muslims

2.4 Million Households To Benefit From FG’s Stimulus Package — Presidential Aide
TO ensure food security for citizens, at least 2.4 million households will benefit from the Federal Government’s post-COVID-19 stimulus package, a presidential aide says. Dr Andrew Kwasari, Senior Special Assistant (SSA), to the President on Agriculture, disclosed this in an interview with the News Agency of Nigeria (NAN) on Sunday in Abuja. Kwasari spoke against the backdrop of projects anchored by the Nigerian Economic Sustainability Committee (NESC) to secure the economy against the effects of COVID-19…MMPN congratulates Muslims MMPN congratulates Muslims

Memo to NBA on Governor El-Rufai

The continuing menace of police brutality