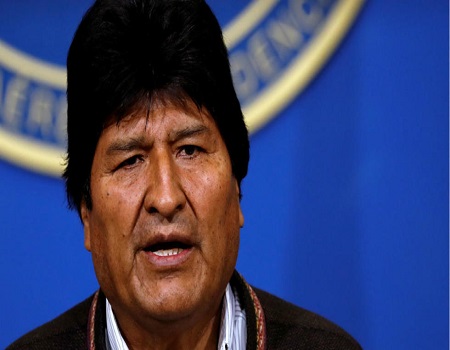 Mexico’s Foreign Minister Marcelo Ebrard said Morales’s life was in danger, and the decision to grant him asylum was in Mexico’s long tradition of sheltering exiles.

Morales’s government collapsed on Sunday after ruling party allies quit and the army urged him to step down in the wake of a disputed election, adding to a sense of crisis in Latin America, which has been hit by weeks of protests and unrest.

Looting and roadblocks convulsed Bolivia after Morales stepped down. He said “violent groups” attacked his house. His exact whereabouts were unknown, though it was believed he had left in the presidential plane for his stronghold of Chapare province.

“His life and integrity is at risk,” Ebrard told reporters. “We will immediately proceed to inform Bolivia’s foreign ministry that under international law, it should offer safe conduct.”

Mexico has informed the Organization of American States (OAS), and will inform the United Nations, he added. The Washington-based OAS delivered a report on Sunday citing serious irregularities during Bolivia’s October vote.

The departure of Bolivia’s first indigenous president, one of a wave of left-wing leaders who dominated Latin America’s politics at the start of the century, comes amid widespread rejection of incumbent leaders from either side of the political divide in the region, from Mexico to Brazil and Argentina.

Argentina last month elected a left-leaning leader, as voters rejected economic policies aimed at stabilising the economy but that deepened poverty and inflation.

Ebrard said earlier on Monday his government viewed Sunday’s events in Bolivia as a “coup” because the military broke with the constitutional order by pressing Morales to resign.

Mexican President Andres Manuel Lopez Obrador praised Morales saying he chose to resign rather than put the lives of Bolivia’s citizens at risk.

25 dead as bus plunges into ravine in Bolivia