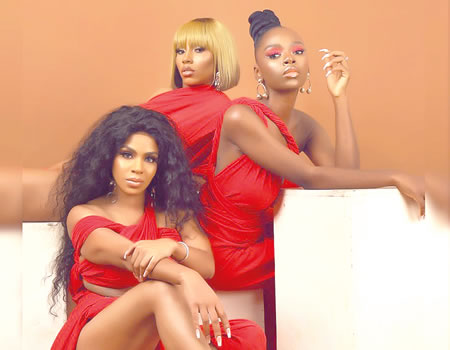 It has been months since they met at Big Brother Naija House but the bond that connects trio of Mercy Eke, Diane and Venita remains unbreakable-at least for now.

While some of the ex housemates seemed to have found a new calling and are quietly following their passion, Mercy, Diane and Venita are joining forces to give their growing fan base something to always talk about.

From Mercy, who won the grand prize to Venita who has made her way into Nollywood with a number of appearances in movies to Diane, who has successfully tied down endorsement deals, the trio appeared to have found a common ground and are now using their strength and influence on the social media scene to support one another.

As part of their plans to show the strength of women supporting one another rather than pulling themselves down, the three ex-housemates wowed millions of their followers on Instagram on Friday with a Valentine’s Day pictures that held many spell bound.

In their picture shared on Instgram, they called on women to show support and love for one another, pointing out that “the success of every woman should be the inspiration to the rise of another one.”

“ We should raise each other up. Make sure you are very courageous: be strong, be extremely courageous, be kind and above all, be humble.”

Tongues have already been set wagging as questions are being raised about what they could be up to. “Time will tell,” they said.

South-East and its planned security outfit