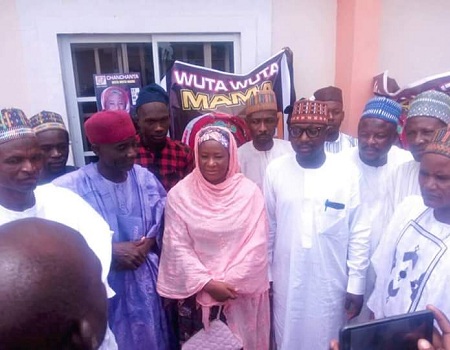 THE ruling All Progressive Congress (APC) in Bauchi State has suffered a set back in Bauchi State as one its chieftains and a member of the State House of Assembly representing Dass constituency, Maryam Garba Bagel has dumped the party and pitched her tent with the Social Democratic Party (SDP).

Maryam Garba Bagel who belongs to the APC camp loyal to the Speaker of the House of Representatives, Yakubu Dogara announced her decision to dump the party following what she described as irreconcilable political differences before and after the party congresses held recently.

While addressing the supporters of her decision to quit the APC, she stated that “I want to use this medium to inform the general public and my teaming supporters, that I have today officially changed my political party from the APC to the SDP”.

She further explained that “My decision became necessary due to lack of internal democracy within the state chapter of the party which was showcased during the last congresses, of which I and many others challenged through various official means but is yet to be resolved”.

Maryam Bagel declared that “I fear that the current situation of the APC in the state will not provide me with a fair playing ground to participate in the current contest for the seat of the Senate in the by-election to be conducted soon. It has, therefore, become obligatory for me in the interest of the people I intended to represent and the development of my constituency, to move to another progressive party that can provide me with all the opportunities I require”.

She further assured that, “I also want to appeal to my constituents to mobilize votes for me in the primaries, and come out in mass to vote in the general election for me or any candidate that become successful at the primaries, so that those that think they can manipulate party officials because they are in power, will remember where they came from and that in Bauchi we are smatter”.

It is believed that more of the politicians who are loyal to the APC camp of the Speaker of the House of Representatives, Yakubu Dogara who are not happy with the conduct of the last congresses of the party held in May may dump the party.