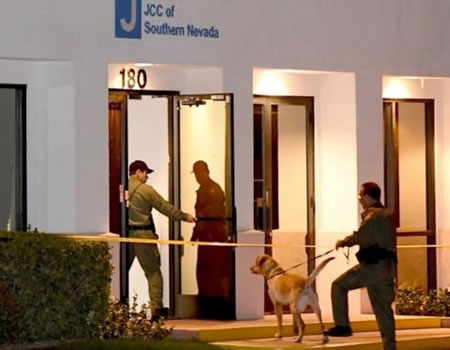 He allegedly made eight threats against Jewish Community Centers (JCC), while claiming to be a former girlfriend. The centres have received over 100 threats this year and several Jewish cemeteries have been vandalised. BBC has it that he was arrested in St Louis, Missouri, and will be in court later on Friday.

As well as his alleged threats against the JCCs in January and February this year, he is also accused of sending an emailed threat to the Anti-Defamation League (ADL) offices in New York City.

The email said his former girlfriend, referred to by the FBI as Victim-1, was behind the bomb threats. It added: “She lives in nyc and is making more bomb threats tomorrow.”

The next day the office received a phone call claiming that explosive material had been placed inside the building. In addition to making threats, he is accused of cyber-stalking Victim-1, which can carry a sentence of up to five years in jail.

The threats were made “as part of a sustained campaign to harass and intimidate” the woman, according to the FBI’s press statement. According to tweets presented by investigators, Mr Thompson accused his former girlfriend of making bomb threats in his name.

“[Victim-1], though I can’t prove it, even sent a bomb threat in my name to a Jewish center, which was odd given her antisemitic statement”, he posted on 24 February 2017. He also made several posts condemning the anti-Jewish threats.

Mr Thompson appears to be a former journalist who was fired from the Intercept over faked news articles. At least 100 phone threats have been made to Jewish institutions since the beginning of January, according to the JCC Association of North America. Three Jewish cemeteries, including one near St Louis, have also faced vandalism attacks.

Participants differ on role of social media in journalism