Looking at Ramadan from the right perspective 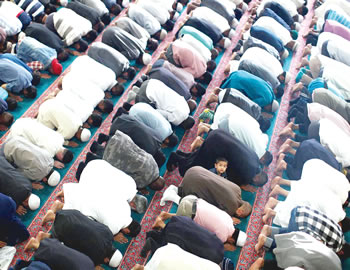 AGAIN, the rush has begun. All over the world, markets are welcoming multitudes of people, majorly Muslims, who are in last-hour rush to stock food items necessary for an eventful Ramadan season.

Good move – but sheer misplacement of priority. This is because the month of Ramadan is neither for the harvest of foods nor an obligation from the Lord of the worlds to outsmart one another in feasts. We have witnessed many

Ramadan seasons and have routinely observed fasting and engaged in other spiritual acts which we believe are associated with the blessed month. But have we ever asked what the goal of Ramadan is?

him a blissful earthily living and a welcome return in the hereafter. Thus, the noble month has an end. However, we all know that the world is in chaos, as man increasingly exhibits acts that have been identified by Allah and His messenger, Muhammad (SAW), as paths to hell. Where, then, are the fruits of Ramadan? No, we won’t find them until we view the month from the right perspective and take stock of our activities during the period.

A key ingredient of success we must carry along in this month-long journey is the mind. Allah says, “O you who believe, the fasts have been enjoined upon you as they were enjoined upon those before you, so that you may be God-fearing” (Q2: 183). The fear of Allah is the objective of all acts of worship: “O people, worship your Lord who created you and those before you, so that you may become God-fearing” (Q2: 21). The mind is the essence of life. It dictates what the limbs carry out. Allah grants preference for the soul, and it is only when the mind understands the goal of

Ramadan that the effects of our numerous efforts in this glorious month will positively rub off on the individual and the society. A clean soul is the foundation of other achievements.

Nu’man bn Bashir has related the warning from the holy prophet Muhammad (SAW), “…certainly within the body is a flesh. If it is sound, then the whole body would be sound, and if it is spoilt, the whole body becomes spoilt. Behold, it is the heart.” For most of us, our hearts are not convinced that fasting is meant to achieve anything. We see it as an end in itself. It is not uncommon in Ramadan to find stern-looking, fasting Muslims spend substantial part of the day sleeping in available mosques. Have households ceased from the practice of stocking cassettes and movies to

while away time in the blessed month? Are many fasting Muslims not overjoyed at the appearance of the crescent in the evening? To these people, the month has come with its difficulties and the more quickly it goes away the better.

To them, the quality of the number of fasts they observe is not the issue but as bearers of Islamic names, how they have been able to ward off the shame that would have accompanied their inability to do same. The heart is just not there.

For others who think they have given the blessed month its due by way of strenuous spiritual activities, they should not be confounded that they have also not impacted their environment nor have they truly prepared for the hereafter. After spending long nights in tahajjud, many hours in the day in supererogatory prayers, Quran recitation, charity and others, one would think that the goals of the month—peace on the land and sound preparation for the next world—would be guaranteed. But the truth is simply that the heart is not involved in these acts.

To ensure that the heart is involved in our spiritual activities in this month, therefore, we must give each of them its due by observing its etiquettes and not do them just for their sake. For instance, during fasting, we should avoid spending a great part of the day sleeping.

We should also ensure moderation in the consumption of food and drink during the breaking of the fast. We should be satisfied with one or two varieties of food. We should also reduce our talk and laughter as much as possible and guard our tongues against backbiting, evil talks, etc. For our prayers and attachment to the mosque, we should try to go early to the mosque and not leave our position after the prayers except for a compelling reason, so that we can be favoured with the prayers of the angels. Allah’s Messenger (SAW) said:

“The angels seek benevolence on one of you as long as he remains in the position that he had prayed and his ablution is not vitiated, by saying: O Allah, forgive him, O Allah, bless him.” The Muslim sister can also dedicate a place in her house where she hastens to and wait for prayer, repeat the Adhan after the Muadhin and stay there for a long period whenever her situation permits it.

On the recitation of the glorious Qur’an, Allah says, “O men, there has come to you an advice from your Lord and a cure for the ailments of your hearts, and guidance and mercy for the believers (Q10: 57). But the Qur’an will not achieve its goal or be a guidance, healing and light except we relate with it in the manner that Allah wants. He revealed the Qur’an for us to ponder over it and then take from it what would be beneficial to us and not to read it with our tongues alone. Allah says, “This is a blessed book We have revealed to you, so that they deliberate on its verses.”

Thus, our tongue, our intellect and the mind have to be completely involved. We have read the Qur’an with our tongues many times and the concern of every one of us has always been how to reach the end. In fact, some of us compete with ourselves on the number of times that we finish the Qur’an, especially in Ramadan. What real benefit do we derive from this? What change does the Qur’an bring about in us? Recitation of the Qur’an with the tongue alone, without the presence of the heart, is like huge chaff that has little benefit. Ali said: “There is no good in recitation that is devoid of pondering.”

On night prayers, it is better for our mind to be connected to Allah within just two rakah than spending hours standing, bowing and prostration with an absent mind.

Also, in our relations with fellow human beings, the mind has to be convinced that we do such acts for the sake of Allah alone. So, as we break fasts with our wives and children, as we provide food for the fasting Muslim, as we aid the orphan and the needy, as we strive to join family ties, as we mend fences and build the community, we should not forget that actions are judged by the intentions behind them. If we have any other goal aside from pleasing Allah, neither will the individual nor the society benefit from the acts.

When the heart is connected to the limbs, our priority will be quality and not quantity. We will be satisfied with little activities to gain the pleasure of Allah rather than unnecessary competition to amass activities for the face value sake.

Luckily, we still have the grace of Allah to take correction and put things in the right perspective. We should pick up our breath, re-arrange our books and then come out from this blessed month with a new spirit, higher ambition and strong emotions that would assist us to face the world and all its attractions and distractions and discharge the duties, for which Allah created us. It is then that the individual can turn a new leaf, our society can be reformed and the path to eternal bliss of paradise can be assured.

How Muslims fast in countries where the sun never sets