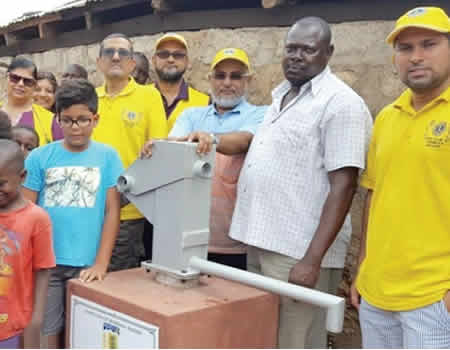 President of the club, Esther Ogo, said the club also constructed a borehole for the school.

The News Agency of Nigeria (NAN) reports that the toilets are located in a group of five in each block of the two storey building classrooms with a student population of 780.

Inaugurating the facilities, Ogo said that the club would continue to support the school and other communities within Obalende.

She promised that subject to availability of funds and prioritisation of already identified needs, the club would certainly do more in the school.

The club president said the club is part of the Lions Clubs International District 404A1, Nigeria, chartered on March 19, 1999.

She said the club had provided much-needed help and support through various needs based projects to people of Obalende community and its environs.

“As part of our 20th-anniversary celebration, we have inaugurated 33 newly renovated toilets in Obalende Primary School, Ijeh.

“For eight years, the school has not had steady potable water, which is necessary for the maintenance of the toilets and other hygiene considerations, the club also provided a new borehole.

She said, as part of a plan to educate the teachers and pupils on proper sanitation and plastic waste management, the club also provided litter bins in strategic places around the school.

Ogo said the club had engaged a sanitation officer to help with reduction of litter and supervision of the renovated toilets.

“Ultimately, the club hopes to provide a skip for the collection of plastic wash,” the club president said.

She said of the 24 members who formed the club 20 years ago, only two were still active, including Austin Onono and Obo Effanga.

The school Head Teacher, Mr Thomas Anyanwu, while lauding efforts of the club, appealed to its members to undertake more laudable projects in the school.

Anyanwu said the children were happy for the renovation of the toilets.

The club has about 1.4 million members in over 46,000 Clubs in 210 countries and geographical areas worldwide.

Students to get N20 million scholarships in UNESCO endorsed competition