Lessons from Edo election: The dearth of ideology in the Nigerian political space 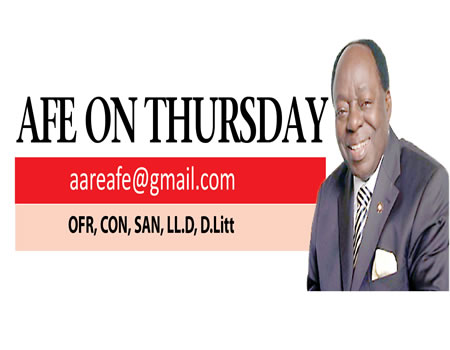 THE governorship election in Edo State has come and gone. The political gladiators and their supporters, depending on which side of the divide they belong, are either celebrating or have gone back to the trenches to fight another day. The Press have been quick to celebrate the victory of Governor Obaseki, attributing it to the growing sophistication and political awareness of the Nigerian voter and seeing in it, a sign of the waning influence of godfatherism in Nigerian politics. Some others argue that the threat of visa ban issued by some western countries on the eve of the elections, ensured that those who had the predisposition to engage in electoral violence and other actions calculated to subvert the electoral wishes of the people, had a serious rethink. Irrespective of these views, I am of the conviction that there are far more serious lessons to be drawn from the elections and Edo State, the most important being the lack of ideology in the Nigerian political space. Put differently, the elections in Edo State have demonstrated that political ideology holds little or no relevance for politicians and the electorate alike in Nigeria. This is so as the re-election of Governor Obaseki on the platform of the Peoples Democratic Party (PDP), a few weeks after his defection from the All Progressive Congress (APC) two parties which theoretically profess different ideologies and manifestoes shows that Politicians the voting public are yet to fully understand or appreciate the importance of ideology in the political landscape.

A political ideology generally represents a set of ethical ideas, values, opinions, principles and set of related beliefs about political theory held by an individual, group of individuals or a particular social class. It embodies theaccepted ideology of any person, group of persons, or a political class which exhibits a recurring pattern of actions that competes deliberately as well as unintentionally over providing plans of action for public policy making in an attempt to justify, explain, contest, or change the social and political arrangements and processes of a political community.

Political ideology, no doubt, plays a significant role in directing the affairs of any society and, even, in creating and shaping a perspective with which the outside world views the society. It dictates the political spectrum of apolitical leader and serves as a compass that gives him directionin taking any and all decisions, including the ones with dire global significance: Adolf Hitler as a case in point. Adolf Hitler’s political ideology was premised around a philosophically authoritarian, anti-Marxist, antisemitic and anti-democratic worldview. He firmly believed that the force of “will” was decisive in determining the political course for a nation and herationalised his actions accordingly.

Hitler’s childhood gave him the perception that Jews were the one who controlled the economy and holding high positions in Germany. In 1903, Hitler’s father died suddenly and two years later, Adolf’s mother allowed him to drop out of school. After her death in December 1907, Hitler moved to Vienna and worked as a casual labourer and watercolour painter. He applied to the Academy of Fine Arts twice and was rejected both times. Lacking money outside of an orphan’s pension and funds from selling postcards, he stayed in homeless shelters. Hitler later pointed to these years as the time when he first cultivated his anti-Semitism – a hostility to, or prejudice against Jews.

In 1913, Hitler relocated to Munich and at the outbreak of World War I, he applied to serve in the German army. He was accepted in August 1914, though he was still an Austrian citizen. Although Hitler spent much of his time away from the front lines, he was present at a number of significant battles and was wounded at the Somme in 1916. He was decorated for bravery, receiving the Iron Cross First Class and the Black Wound Badge.Hitler became embittered over the collapse of the war effort, which experience reinforced his passionate German patriotism, and he was shocked by Germany’s surrender in 1918. Like other German nationalists, he purportedly believed that the German army had been betrayed by civilian leaders and Marxists. He found the Treaty of Versaillesdegrading, particularly the demilitarization of the Rhineland and the stipulation that Germany accept responsibility for starting the war. With these events in his life, Hitler became extremely hateful to the Jewish people which prompted him to create anti-Jewish laws whicheventually led to the Holocaust that eradicated over 6 million Jews before and during World War II. Such is the significance of political ideology!

In contemporary times, particularly in the developed economies, ideology still holds sway in determining the opinions, views, ethical ideas, and principles guiding and directing the affairs of political parties. More often than not, these political ideologies largely influence the decision of voters in electing the party and its candidate who presents a more favourable ideology to the voter.  In the United States, two political parties are predominant – the Democrats and the Republicans. The platform of the Democratic Party is generally based on American liberalism, contrasting with the conservatism of the Republican Party. Democrats have been known to be staunch advocates of consumer protection rights, workplace safety regulation, equal opportunity, disability rights, racial equalityregulations against environmental pollution, criminal justice reform,abortion rights and the LGBT community, as well as a pathway to citizenship for undocumented immigrants. Democrats typically agree with the scientific consensus on climate change and favour a multilateral approach in foreign policy.

On the other hand, Republican ideology is based on American conservatism, which incorporates both economic policies and social values. The Republicans are known to supportlower taxes, free market capitalism, stiff restrictions on immigration, increased military spending, gun rights, restrictions on abortion, deregulation and restrictions on labour unions. In the United Kingdom, there are equally two predominant political parties – i.e. the Conservative Party and the Labour Party. The Conservatives generally adopted liberal economic policies—favouring free market economics, limiting state regulation, and pursuing privatisation. The party is British unionist, opposing both Irish reunification and Welsh and Scottish independence, and historically supported the continuance and maintenance of the British Empire. On the other hand, the Liberals have an ideology that draws on both the liberal and social democratic traditions. The party is primarily social liberal, supporting redistribution but sceptical of increasing the power of the state, emphasising the link between equality and liberty. The party supports investment and progressive taxation, but also promotes civil liberties and a less centralised economy. They equally support a range of constitutional reforms, including advocating for a decentralised federal structure for the United Kingdom, including devolving power to the regions of England.

The political ideologies of these developed countries have been in force for centuries, and therefore, it is highly unlikely to witness any substantial modifications. A corollary to this is that it is uncommon for members of political parties to switch political allegiance. Over the period 1947 to 1997, there were only 20 members of the House of Representatives and Senate in the United States who switched parties. It is generally unlikely for a member of the Democrat Party which is known for its open support for LGBT rights to wake up one day and decide to leave the party to join the one which is more restrictive on these rights. Members of these political platforms, including the voting public,must identify with the ideology of these parties, and every campaign, manifesto and dogma presented by the party candidate must be in conformity with these party ideologies. For instance, the ideology of the Republicans, being advocates of gun rights and restrictions on immigration, will be more attractive to a voter who owns, or intends to own a gun; and who favours a ban on immigrants.

The Nigerian political space is riddled with unbridled, indiscriminate political defections. There is hardly an election year that does not feature widespread political exodus and with the current trend of cross carpeting being enacted in the Nigerian political landscape, fundamental principles, scruples and ideologyhave all been jettisoned for greed, self-interest, and opportunism. Usually, a political defector in Nigeria does so, not as a reflection of any ideological leaning, but because he/she feels discontent with the former political party to which he/she belongs.These defections pose the question of morality, particularly when viewed from the standpoint that defections in Nigerian politics are primarily as a result of personality clash, power tussles, divergent views on the operations of a political party‘s philosophy, crisis or division within a given party, disagreement on party‘s position on an issue, and the realization of personal political ambition.

Next week, I will proceed to discuss the origin of defection in Nigeria, its rationale, incidences, effects, among others.

At Last, Reps Back Down On Controversial Water Resources Bill

Biafra: I’m Not Afraid To Go Back Home ― Onyeka Onwenu