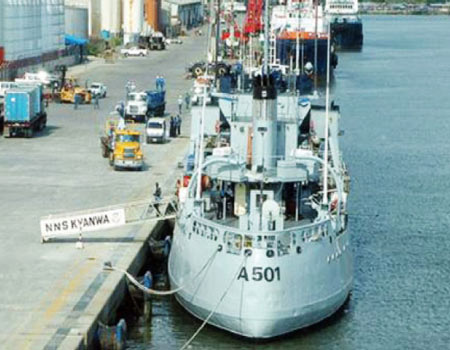 THE Chief Executive Officer of the Lekki Port LFTZ Enterprise, Mr Navin Nahata has revealed that the construction of the Lekki port Breakwater has reached over 235 metres completion stage. This is even as the Lekki port CEO commended the Lagos State government and the Nigerian Ports Authority (NPA), the major stakeholders in the development of the Lekki Port project, for their unwavering support so far on the project.

Nahata stated this in Lagos recently after his visits to the Lagos State government and the NPA. He met with the Lagos State Commissioner for Commerce, Industry and Cooperatives, Mrs Olayinka Oladunjoye and the Managing Director of the NPA, Hadiza Bala Usman in their offices.

He noted that the commencement of construction and the quick progress recorded so far could not have been possible without these stakeholders. He also commended the Minister of Transportation, Rotimi Amaechi as well as other regulatory agencies for their commitment to making the port a reality. Furthermore, he expressed gratitude to the host communities for being peaceful and supportive.

Nahata assured all stakeholders especially the shareholders that Lekki Port and its strategic partners will work assiduously to deliver a world-class port that would make Nigeria the trans-shipment hub for West Africa.

Speaking on the pace of construction work, the Chief Executive Officer expresses satisfaction with the level of work so far, and revealed that the first breakwater has reached an advance stage with over 235 Metres completed.

In her own reaction after the meeting, the Lagos State Commissioner for Commerce, Industry and Co-operatives, Mrs Olayinka Oladunjoye assured the management of Lekki Port of the unwavering commitment of the Governor Akinwumi Ambode led administration towards the actualisation of the Lekki Port project.

In a similar vein, the Managing Director of the Nigerian Ports Authority (NPA), Ms Hadiza Bala Usman, reaffirmed the support and partnership of the Federal Government to the project through the Ports Authority. She applauded the company for its excellent stakeholder engagement policy

WHO provides first-ever approval for rectal artesunate product for malaria