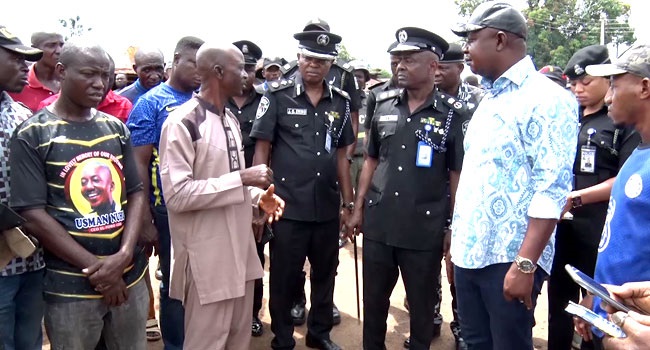 The Bagana community in the Omala Local Government Area of Kogi State have been deserted following the invasion by some gunmen.

This is just as a similar attack occured barely a month ago leading to the death of about nine persons and property worth millions of naira destroyed forcing hundreds of inhabitants to seek refuge in neighbouring communities.

Tribune online gathered that no fewer than 6 persons have been killed during the attack which started on Monday morning while several persons are missing.

The attack took place very early on Monday, also left several others injured while many locals were forced to abandon their homes.

The latest attack is believed to be a result of the tussle between the people of Bagana and the Patani community over the ownership of a piece of land.

The gunmen were reported to have struck at about 7:30 am in the morning when most of the youths in the community had gone to the farm.

The attackers who went straight to the House of one Chief Salifu Anyebe, who in a fortnight ago had his stool classified to third class – set the palace ablaze and in the process, shot three persons including one Madam Achebe Alih popularly known as Mama Teacher to death.

Houses and business centres were left in ruins after the attack, and the palace and vehicle of the traditional ruler of Bagana were not speared by the assailants.

Our Correspondent reliably gathered that the reprisal led to the burning down of the palace of the Oga Onu Ife, a paramount ruler and the District Head of Bagana, Chief Alih Haruna, and other houses belonging to some notable inhabitants were also torched.

According to the locals, a house belonging to the serving councillor, representing the district, Hon. Alidu Usman Idakwo and those of other tribes were not spared.

An eyewitness simply identified as Salifu Yakubu narrated how the gunmen invaded the community.

Yakubu, who is also the son of the traditional ruler of the community, stated that the incident had nothing to do with herds, but it was a fallout of a communal clash.

The Chairman of Omala LGA, Ibrahim Abo, also confirmed the incident. During a visit to the community, he appealed to the youths of Bagana to remain calm.

According to Abo, the temptation to embark on a reprisal must be resisted as the state government is already making efforts to resolve the dispute.

Meanwhile, Police authorities in the state have confirmed the incident.

The Commissioner of Police in Kogi, Idrisu Dabban, who led some top officers of the command to Bagana for an on-the-spot assessment assured the residents that the command under his leadership would not relent on its oars until the communal crisis was brought to an end.

He added that the police have put necessary measures in place to forestall a reoccurrence of such an incident in Omala local government council.

COVID-19: Minister cancels meeting of moringa stakeholders due to overcrowding