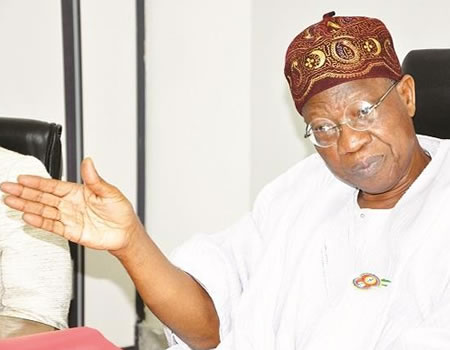 THE Minister of Information and Culture, Alhaji Lai Mohammed will host a 2-day Annual Round Table for Indigenous Language Newspapers from May 15 to May 16 at Arewa House in Kaduna.

In a statement issued in Abuja on Thursday by the Minister’s Chief Press Secretary, Mr Joe Mutah, he said the round table is organised by the National Institute for Cultural Orientation (NICO) in collaboration with the Ministry.

He said Gov Nasir El-Rufai of Kaduna State will be the Special Guest of Honour at the Round Table with the theme: “Nigerian Indigenous Language Newspapers and National Development”.

Mutah said the event is designed to build the capacity of publishers, editors and art correspondents of the indigenous language newspapers.

He said the round table will also help to keep the stakeholder abreast of contemporary realities in the sector and enhance their professional skills and competence for effective service delivery.

“The event underscores the relevance of indigenous language newspapers to national development and appreciates their role in the promotion of our cultural heritage.

“The event also emphasizes the importance of indigenous language newspapers as a potent tool for information dissemination and grassroots mobilisation.

“It advocates for a synergy between the government and indigenous language newspapers in nation building,” he said.

The Minister’s media aide said that the Chairman, Senate Committee on Culture and Tourism, Sen. Mathew Urhoghide will chair the opening ceremony and the Chairman/Publisher of Leadership Newspapers, Mr Sam Nda-Isaiah will deliver the keynote address.

He said the CEO/Editor-in-Chief, Media Trust Limited, Mallam Manir Dan Ali will present the lead paper while Prof Olu Obafemi of the University of Ilorin will serve as Moderator.