by Tribune Online
in Brands and Marketing
Reading Time: 7 mins read
A A 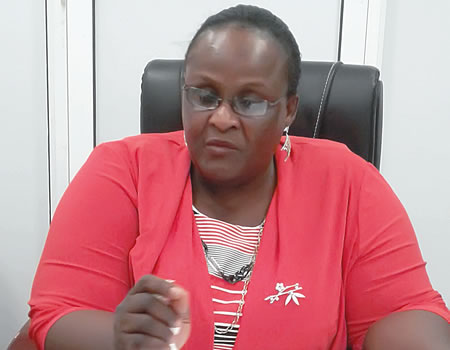 The General Manager of the Lagos State Consumer Protection Agency (LASCOPA), Mrs. Olugbode Oluwakemi, in this interview, with Akin Adewakun, justifies the inauguration of the state’s relatively new consumer protection agency, the Lagos State Consumer Protection Agency (LASCOPA), noting that it would have amounted to criminal neglect, if the state did not have a regulatory body, where consumers in the state could make a recourse to. Excerpts:

The journey so far

After our inauguration on January 3rd, we secured this place and we moved in at the end of February and we started our first activity, it was a road show. Immediately after the road show, we started receiving complaints from consumers, on different issues. From someone who purchased recharge cards valued at N200,000 and  discovered they were used cards.  In fact, that was the very first matter that we treated here. We intervened and after mediation, the person that gave him the cards, refunded his money.

Level of  response from Lagosians They’ve  been coming.  People walk in here to lodge their complaints, and sometimes those complaints are lodged online too. We have our e-mail address: lascopa@lagosstate.gov. ng. In fact, we just printed out some of such complaints, today. People have been coming, but we are hopeful that this will increase very soon as they begin to get wind of our activities and existence.

CBN, Police, other agencies to prosecute sellers, abusers of Naira

We received various complaints. Some  against the Discos, some against banks and other players in the other sectors of the economy.

Interestingly, all complaints that we had received in the nation’s financial sector  is just against one big bank, one of the first three in that sector in the country.  Some also dealt with matters  that had to do with purchase of spare parts. There was a particular incident when somebody purchased a Mitsubishi Van Bus spare parts, valued at about a hundred thousand naira. He actually handed  over the money to his mechanic and lo and behold when the thing was mounted, it didn’t work. It was smoking. So he lodged a complaint here against the trader and we intervened. We actually went to Ladipo Market. It wasn’t easy, though. But we went. They co-operated with us and  at the end of the day, the engine was replaced and the complainant was happy.

Another was complaint was against a motor company. The complainant said his vehicle was taken there for repairs and the thing was not satisfactorily done. We intervened, and at the end of the day, he was happy. He commended our efforts, telling us that after our intervention, the thing had been fixed. Also the Discos, especially the IKedc, they wrote to us about them. Surprisingly, they responded.

They even follow us on our Twitter handle, and we are working on the issues. Essentially, the complaints we received on the Discos have to do with estimated and outrageous bills, some complained that the discos ripped them off and that the situation was not rectified. But we are hopeful that we’ll be able to resolve the matters that have to do with the Discos. The nation’s insurance sector too is not left out.

Two weeks ago, someone complained his policy was due and his insurance company gave him a dud cheque. We wrote to the insurance company, though they didn’t reply us, the man came back to say the matter had been resolved, that they had withdrawn the cheque and paid him off.

When complaints are received, we write to the respondent, and the law says we should give respondents 14 days to respond, maximum 21 days. Within that period,  many have co-operated.  Many companies replied. Their response usually determine our next line of action.  For instance, after the response, we invite both parties for mediation session, and so far, this has succeeded, except one matter where we are filing an action in a  newly-created small-claim court. Somebody collected money from someone, and only brought part of the money. He admitted collecting the money, he didn’t deny. He was supposed to give the woman accommodation,  he didn’t ,  and he never refunded her money. When we intervened, he admitted to the fact and promised to refund the money. He came back with part of the money. Since he deposited the amount, he has not paid up. So we’ve gone to file a case against him at the small-claims court.

We’ve also received complaints from the soft drinks-making companies. So we invited them to mediation session and after mediation, they promised to go back to resolve the matter and then they gave complimentary drinks to the customer. But there was a particular case which mediation  has not resolved. The customer says he’s not accepting the complimentary drinks. He is claiming N5million as damages. But, the company said  their policy is not to give money.  He complained about the way they treated him as a customer when he went to lodge the complaint. He said at one point they were threatening him, telling him he could go to court if he liked. Then we invited them to a mediation session, we had to point out that as big as the brand is, it is expected to know that the customer is always right. So we advised the team that came to go back to their management and look at the possibility of doing something better than two packs of drinks.

We also dealt with a big operator in the pay tv market segment. We received complaints from people who said they responded to their promos and when it was time for compensation, they did not get. In fact, I was also a victim. They redressed the matter, gave the customers two/three months of free viewing and apologized for the situation. So the complaints cut across every segment of the market you can imagine.

The power to prosecute

Yes,  we have the power to prosecute. We have three core units here. One is the consumer education. They do all kind of sensitization here. We have the monitoring and enforcement unit. Their own is to go into retail outlets, supermarkets and all kinds of stores to ensure that they don’t give substandard products to consumers. And when they find out that  some of those stores  some of these expired products on their shelves, we tell them that it is wrong. Many have co-operated, they immediately removed the expired products. For those that are expiring, we advise them on what to do, such as asking them to keep the products aside and indicate clearly that the items are expiring soon, so that the consumers will know.

An incident in Ogudu comes to mind here, The owner of a store did not give the agency’s monitoring team access to the store, and the law says you can file compliance notice for any kind of infringement of the provisions of our law. After filing the compliance notice, their lawyer ran here and said he had read the law and apologized on behalf of the client. We were invited to come back, and interestingly, the man was very co-operative. Incidentally, all his goods were fit for purpose and of quality.  There was another in Surulere that kept the monitoring team waited for hours and didn’t  give them access. We therefore filed a compliance notice, and the person that had gone to serve the notice came back this morning to say they didn’t accept the notice.  In that case, we ill escalate actions on the issue.

Why we are taking this ‘soft’ approach

The idea is that since it is a new agency and its operations are basically new, we want to educate the people. Let people know that we are coming on a friendly note for now. Like I said earlier, the law empowers us to prosecute anybody that contravenes any provision of the law and give a fine of N750,000 or jail term. If the infringement continues, the court can impose  further a fine of N20,000 per day, as the long as the infringement lasts. We have the power of enforcement, but because we are still new, we want to educate the people first.

That is why we are parleying with traders in the different sectors of the market. Procedure for lodging a complaint Quite simple. You come in here and complain. Our doors are open to every consumer, and don’t forget, we are all consumers, in one form or the other. We don’t close till after six.  The agency not for the elites alone.

Definitely, we are not for the elites alone. We’ve made provisions for the barely literates, who might have one complaint or the other to lodge. If you come here and you are unable to express yourself, we’ve designed form where the details of the complaints will be filled. If the person is not literate enough to write, we have people here who understand   different languages. They will listen to the complainant and help him or her fill the form. So we are for everybody. And so far, the agency has not rejected any complaint. As long as the issue is not more than six weeks before it is reported.

CBN, Police, other agencies to prosecute sellers, abusers of Naira