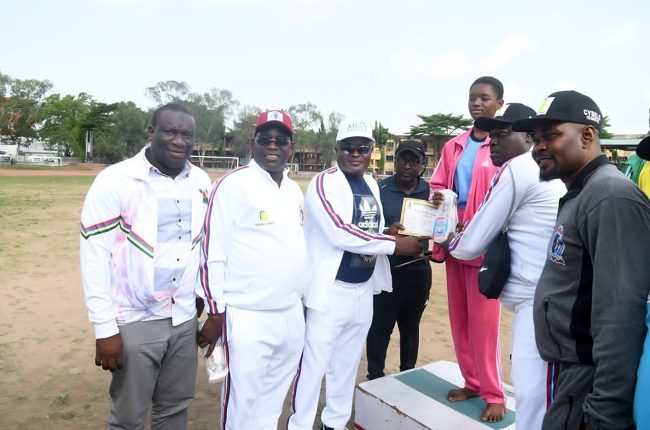 The Speaker of the Lagos state House of Assembly Rt. Hon Mudashiru Ajayi Obasa has appealed to Philanthropic organisations to partner with schools in order to harvest the hidden sports talents of students in public schools.

He made this call during the 9th edition of the Intercolliage Sport Competition of First Generation Secondary Schools in Lagos State.

Obasa noted that the first set of Footballers and best athletes were gotten from secondary schools.

“The atmosphere here is a nostalgia of what it was in the past when students competed favourably among themselves before cultism and other vices crept in.

I am delighted to be here as a Special guest, the House of Assembly under my leadership appreciates this gesture of sport Competitions among schools.”

The Chairman of Board of Director of LAFGHECA, Otunba Dele Olapeju said the presence of the Speaker was a morale boaster to the organisers, the students and the Teachers.

The Principal of St .Finbarrs College Mr. Victor Biyibi said the Sport Competition among the students was meant to promote cohesion, love and friendliness.

“Students excel through Sports, we need to ignite the passion in them and identify their areas of strength in Sports,” he said.

According to the Franchise Sponsor of the Tournament, Comrade Adedeji Owoeye, “it is very expensive to organize Sport Competition hence, the need to bring in Sponsors, especially old students. The role of sports in bringing unity, oneness and togetherness cannot be overemphasized. Companies donated their products because of the love they have for sport as a Bridge Builder.”

Igbobi College won the competition with five Gold medals, CMS Grammar School came second with 4 Gold, 3 Silver and one Bronze while Apostolic Church Grammar school came 3rd with one Gold and one Bronze.

The event was witnessed by the Member representing Mushin at the Lagos State House of Assembly and Chairman House Committee on LG and Community Affairs Hon Sabur Olayiwola Olawale, Principal of Schools, Lagos State Ministry of Sports and others.

Dangote Refinery: Power of a dream