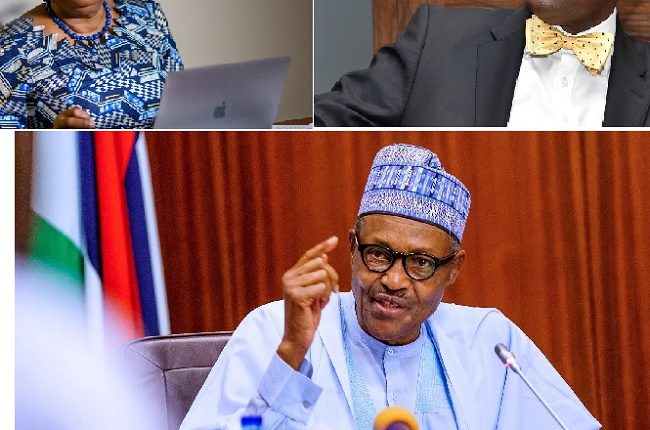 They made the call virtually at the opening session of the ongoing three-day economic summit in Lagos, tagged: “Eghingbeti Lagos Economic Summit 2021,” themed: “Setting the tone for a greater Lagos, at Eko Hotels and Suites, Victoria Island, Lagos.

Buhari said the Federal Government was determined to open up opportunities by which Lagos State can achieve it’s project of a Smart City, even as he noted that the Federal Government had several ongoing projects in Lagos, commending the state governor, Mr Babajide Sanwo-Olu for his resolve to continue the development of Lagos.

The president also commended the Lagos State government for its partnership and collaboration with the Federal Government for putting together an economic summit aimed at improving the lives of citizens of the state and Nigeria in general.

“We want a Lagos that is united and ensure its economic prosperity leaves no one behind. I urge all stakeholders to come up with plans to achieve Lagos of our dreams,” Buhari said.

In a virtual questions and answers session with Governor Sanwo-Olu, Dr Okonjo Iweala said apart from construction of roads, Lagos should invest in technology such as broadband for every household, embrace artificial Intelligence and Digital economy, ensure a steady and sustainable supply of electricity and renewable energy/Green to remain competitive in the next decade.

“The state should harness the youths by providing employment. The state should move from importing raw materials but exporting primary raw products to value and processing, to industrialize Africa,” she stated.

AfDB president, Dr Akinwunmi, in his contribution, stressed that the youths are the asset for the state and should be given a chance in contributing their own quotas to its development, even as he charged the state government to invest in education by turning tertiary institutions in the state to world-class.

Akinwunmi, while also calling for more investment in the transport system, argued that the private sector needed to be mobilised to support the new Lagos, declaring that a greater Lagos “where visions are turned into reality and where women and youths thrive,” was on the way.

“Youths are not the problem of Lagos, they are the assets. The slogan should not be the young shall grow, but the youth have arrived. Youths do not need empowerment or handouts, what they need is an investment.

“A prosperous Lagos will bring a healthier Lagos. A lot needs to be done in tertiary education especially in science. We must turn tertiary institutions in Lagos to world-class.

“The climate situation in Lagos should be attended to urgently. There is also a need to invest more in the transport system.

“Private sector needs to be mobilised to support the new Lagos. The taxes belongs to the people. There must be accountability for the taxes collected. I see a greater Lagos, a Lagos where visions are turned into reality and where women and youths thrive,” Akinwunmi stated.

Governor Sanwo-Olu, in his earlier remarks, disclosed that the summit was originally planned to take place in November 2020, but had to be shifted due to fallout of the #ENDSARS protests, adding that the summit was the first edition to happen amid Coronavirus pandemic.

“Here is a pandemic that has disrupted life in every country in the world, and ushered in truly unprecedented times, where physical contact with family and friends could be a source of debilitating illness, and where our places of worship and community interactions have been upended.

“Our growing youth population are disillusioned, their future and prospects for jobs are in question. We must all be distressed by this state of affairs, living as people with no hope or inspiration should never be an option for our young people.

“In the midst of every adversity lies an abundance of opportunities; it all depends on how we choose to view things.

“We are emerging from the most significant act of economic destruction that Lagos has witnessed in decades, combined with the effects of being the national epicentre of a stubborn pandemic.

“The challenge for us is to ensure we never forget our indomitable spirit to emerge out of adversity better and stronger.

“We must continue to maintain and nurture our audacious hope, and the intention to always bounce back from adversity and build back better and boldly.

“Today’s Lagos has seen so many revolutionary changes to usher in a new era of prosperity; reflected in improved infrastructure, economy, and security.

“We are still confronted with many challenges, no doubt, but it is also important to identify the progress so we can guard it jealously and build on it,” the governor said.

Sanwo-Olu, while enumerating the factors that made Lagos thick, to include: The largest city in Nigeria and the 7th fastest growing city in the world, seaports that control over 75 per cent of Nigerian imports, a 180-kilometre coastline and the busiest airport in West Africa, among others, asserted that the state is one huge and accessible market within the West African Economic zone, and well-positioned for the African Continental Free Trade Area agreement.

“Lagos is one huge and accessible market within the West African Economic zone, and well-positioned for the African Continental Free Trade Area agreement,” he declared.

Speaking further, Sanwo-Olu further declared that, come 2030, Lagos would be a Smart City, fully covered by a network of several thousands of kilometres of fibre optic infrastructure that would carry broadband internet into homes, offices and schools and unleash a technology revolution that had never before been seen in this part of the world.

Besides, he said the Smart City that is unfolding will also be home to a network of intelligent cameras that will support not only security and policing across the state, but also traffic management and data collection for urban planning.

“We are pushing ahead with plans to develop, in partnership with the private sector, a Medical Park that will offer world-class medical and diagnostic services in Ikoyi.

“We have so much to celebrate, but there is also so much to be done, and we are driven by a sense of urgency on the enormous task ahead to build the Lagos of our dreams,” the governor said.