LAGOS HELICOPTER CRASH: We heard a sudden loud sound from the building —Residents 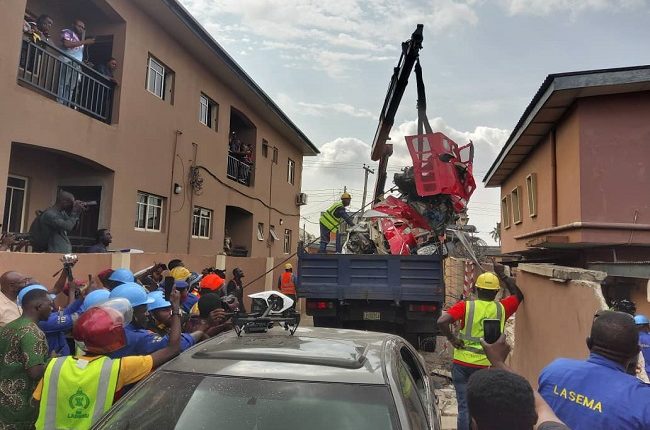 Some residents of Salvation Road in Opebi area of Ikeja, Lagos expressed shock over the crash of the helicopter into the building, thanking God for saving their lives. The residents, who spoke to the News Agency of Nigeria (NAN) at the scene of the incident on Friday called for proper maintenance of aircraft before flying.

Mrs Grace Awolaja, a resident told NAN that it was shocking and surprising to experience such an unexpected incident. According to Awolaja, the helicopter was seen hovering in the sky for some minutes before crashing into the building.

“We thank God that nobody was affected in the building but l learnt that the pilot and two people died,’’ Awolaja said.  Another resident, Alhaji Saliu Bamidele, suggested that engine seizure might be responsible for the crash. Bamidele said that the helicopter crashed at the back of house No. 16, Salvation Road, damaging two cars and the fence of the building.

Mr Mark Okeke, a fabric shop owner in front of the building, told NAN that the helicopter was sighted in the air struggling to crash-land in the canal but “suddenly pick up and faced the building’’. “We just heard a loud sound with heavy dust from the house.

“Many occupants of the building were not at home,” he said. The Acting Coordinator, Lagos Territorial Office of the National Emergency Management  Agency (NEMA), Ibrahim Farinloye confirmed that the helicopter belonged to  Quorum Aviation Ltd. Ibrahim said that the incident occurred at about 12.47 p.m.

He confirmed that two persons died immediately while one person was taken to the intensive Care Unit of the Lagos  University Teaching Hospital (LASUTH). “The helicopter, Bell 206 with registration number 5N-BQW, which was returning from training in Port Harcourt crashed into a building at No. 16A Salvation Road, Opebi, Ikeja,’’ Farinloye said.