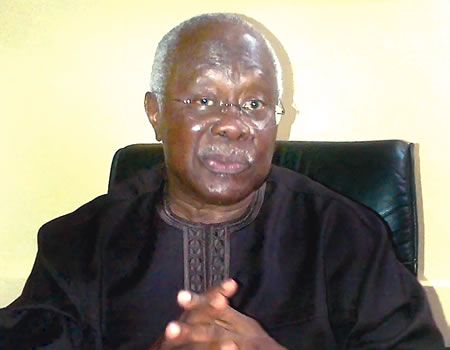 Former Deputy National Chairman of the Peoples Democratic Party (PDP), Chief Olabode George, on Monday, warned members of the party in Lagos State to beware of moles in the party fold, saying they were out to sabotage the chances of PDP winning the forthcoming bye-election in the state.

George gave this charge while speaking at the commissioning of a campaign office for the party’s candidate for the Senatorial race.

This was just as the PDP chieftain, who is also the Atona Oodua of the Source, wondered of what importance is former Governor Ayodele Fayose of Ekiti State to the state chapter of the party.

ALSO READ: FG to guarantee 400 houses each in 774 councils

Fayose had, during his recent visit to the state, told leaders and members of PDP that they must compulsorily retire George from politics before they could make any headway.

Chief George, while cautioning party leaders and members against the antics of moles within the fold, assured that victory was on the way for PDP in the bye-election.

“We need to be extremely careful, the tide is on our side, we shall win the Lagos East Senatorial seat and the Kosofe constituency II bye-election, I will advise we should be careful of our enemy, who are moles in the party,” he said.

Speaking further, George noted that the success the party recorded in Edo State governorship election showed that INEC was determined to make the vote of people count, assuring further that PDP would emerge victorious in the coming bye-election.

He urged Lagosians to vote all PDP candidates for the bye-election, stressing that was the only way to put an end to the hardship the All Progressives Congress (APC) government had inflicted on them in the state.

Addressing the press shortly after the commissioning of his campaign office, Gbadamosi appealed to the people of the state to vote for him in the coming poll, assuring that he would not disappoint them.

“You should vote en masse for the PDP in the bye-election, use your voters’ cards to deal with the oppressor. If you vote me, I shall deliver on all promises I made, I will ensure you get dividends of democracy,” he said.

Gbadamosi assured people of the state that if elected, he would work at reviving the industrial estates, particularly those that fall within his constituency which had become moribund due to lack of access road.

He also assured the electorate that he would pursue a true federalism agenda to enable the state to manage the resources available to it.