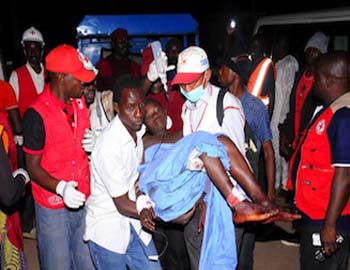 AS emergency operations continued at the site of the three-storey building that collapsed in Ilasamaja area of Lagos State, on Wednesday night, three persons have been confirmed dead while 19 were rescued alive.

The operations continued all night to the early hours of Friday.

The discovery of the first dead person was late Wednesday night.

The building ,situated on 6 Richard Abimbola  Street  reportedly caved in around 2 O clock  and covered the artisans and construction workers.

The General Manager  of the Lagos State Emergency Management  Agency ,Adesina Tiiamiyu confirmed the collapse of the building.

It was gathered that the workers and artisans were spread on the first ,second and third floors of the building ,when it collapsed on them.

The LASEMA boss added that “ On getting to the scene of incident, it was noticed that an uncompleted building at no 6 , Richard Abimbola street collapsed while unknown number of labourers were working at different areas.”

Some of the rescued labourers and artisans were treated by officials of the Lagos State Ambulance Service (LASAMBUS).