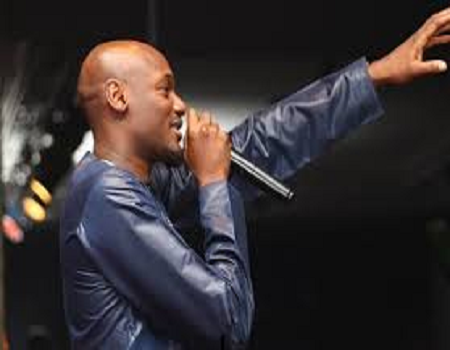 Popular Nigerian artiste, Innocent Idibia (2Baba) has urged Kogi youths to be peaceful, civil and to shun violence during the Nov. 16, governorship poll in the state.

Idibia made the call at a Peace Concert on “Vote Not Fight, Election No Be War”, organised by participation Initiative for Behavioural Change in Development (PIBCID) in collaboration with National Democratic Institute (NDI) on Tuesday in Lokoja.

The News Agency of Nigeria (NAN) reports that the concert which drew over 5,000 youths across the 21 Local Government Areas (LGAs) of the state, as well as tertiary institutions, was supported by UKaid, USAID and 2Baba Foundation.

The popular musician asserted that the process of election should be peaceful and civil, stressing that his organisation, 2baba Foundation, has mobilised over 62 million people in the country to drive the campaign for peace.

Idibia had earlier paid a courtesy visit on Chief Edward Onoja, Chief of Staff and running mate of Gov. Yahaya Bello as well as the Peoples Democratic Party (PDP) Secretariat in Lokoja.

He urged security agencies and the electoral umpire, Independent National Electoral Commission (INEC) to be neutral in the discharge of their duties.

Prof. James Apam, the state INEC Resident Electoral Commissioner (REC), said the state had witnessed various forms of electoral violence in past elections and there was a need to change the situation.

Apam said that as part of preparations for the election, the commission had recruited senior ad hoc staff who were currently being trained, adding that students from tertiary institutions would also be used in conducting the election.

Ms Halima Sadiq, Executive Director, PIBCID, stated the concert was organised to promote peaceful and non-violent election, saying that the youth had latent energy and ability that could be channeled to productive engagements for the attainment of peace.

She urged them not to present themselves as willing tools for violence by selfish politicians, urging them to exercise their franchise, value themselves and promotes peaceful election.

Dr Raymond Esebagbon, Acting Country Director, NDI, partners in the “Vote Not Fight, Election No Be War”, campaign said the institute’s message to the youth was for them to do the right thing and resist attempts by selfish individuals to use them for violence during the election.

“We want to promote peace during the election. Youths can participate in the election in different ways – as staff of INEC, voters, agents and so on but all must be towards ensuring peaceful, free and fair conduct.”

Agbogun said that the position of women in politics was very key and urged youths not to allow themselves to be used in perpetrating violence.

“We want our women to be given space to participate, take elective and appointive positions in government.”

NAN reports that nine performing artistes comprising seven musicians and two comedians performed alongside 2Face Idibia and his wife Ann, at the concert.