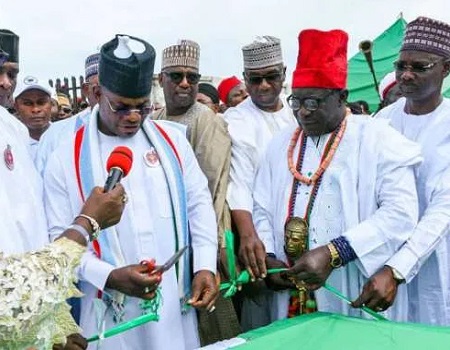 Governor Yahaya Bello in Idah area of Kogi State on Saturday performed the groundbreaking of projects as the party flagged-off campaign for the 2019 governorship election in the state.

Bello also assured that his administrations will complete the Idah-Agenebode bridge to open up the state to more opportunities and ease human and vehicular movement.

Gov. Yahaya Bello who stated this at the groundbreaking ceremony of the Idah-Agenebode bridge, as part of activities to signal the official flag-off ceremony of his reelection campaign held at Idah today, assured that no stone would be left unturned in ensuring its completion.

He stated that since his assumption of office as governor he has made the wellbeing of the people cardinal, assuring the people of more dividends of democracy in the coming years.

The governor who described the construction of the Idah-Agenebode bridge as one that is long overdue expressed his determination to surmount the challenge and see to its completion.

The governor described the area as one blessed with resources. He lamented that the natural barrier has however limited the exploitation of the potential.

He expressed confidence that those benefits would soon be harnessed when the Idah-Agenebode bridge is completed.