Killers of two OOU students, 21 other suspected criminals paraded by police in Ogun 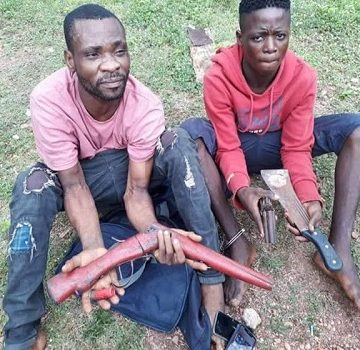 SUSPECTED killers of Oriade Adebisi, and his girlfriend, Julian Image, both undergraduates of the Olabisi Onabanjo University(OOU), Ago Iwoye, have been arrested by the Police.

Those arrested were Muritala Babatunde and Razaq Taiwo who are indigenes of Ogun and Lagos states respectively.

Babatunde (29) and his accomplice Rasaq aka Iku (18) were said to be members of the Aiye confraternity said to be threatening the peace of residents of Ijebu North Local Government Area of Ogun State.

The duo were arrested following the combined effort of the operatives of the Inspector General of Police- Intelligence Response Team(IRT) and men of the Federal Special Armed Robbery Squad (FSARS)in Oyo and Ogun Commands following complaints about the sudden disappearance of their victims.

Addressing newsmen during the parade of the suspected killers and 21 others, the State Commissioner of Police, CP Ahmed Iliyasu, on Friday, said the Police would not rest on its oars to rid the State of any criminal acts.

Iliyasu explained that the effort of the IRT team and FSARS operatives from both Ogun and Oyo states paved way for the arrest of the criminals, who killed the victims with hard objects and dumped them inside a bush in Awa along the Ijebu -Ode/Ibadan expressway.

He said both criminals confessed to the crime having been found in possession of an iPhone x with Etisalat sim and a pair of canvass belonging to Oriade.

The CP said a member of the gang identified as Sadiq now at large would be fished out by his men.

Muritala while fielding questions from newsmen said he and his accomplice killed Oriade whom he alleged was a member of the Eiye confraternity until his gruesome murder had been sponsoring a rival cult and failed to recognise him as the overall cult head of the locality.

The suspect who dropped out of the same institution said he regretted his action the moment he left the scene of the incident.

“I never knew that I will be arrested in connection with the murder of Oriade and his girlfriend because of the way and manner we carried out the nefarious act.

“I was pushed to kill him because he failed to “settle” me. He had been promising me and not keeping to his promise.

I was infuriated by his attitude anytime we discussed the money issue. When I got information that he was coming to Oru-Ijebu to meet one of his friends, we laid ambushed for me.

“We whisked him alongside with his girlfriend to a bush along Awa Ijebu, tortured them before we killed them with planks at midnight and later dumped their bodies at the back of an uncompleted building,” he added.

The CP said one Honda Crosstour marked LAGOS FST 350 FA belonging to Oriade was equally recovered from them.

Other criminals were arrested for various crimes such as kidnapping, cultism, armed robbery, conspiracy, and stealing.