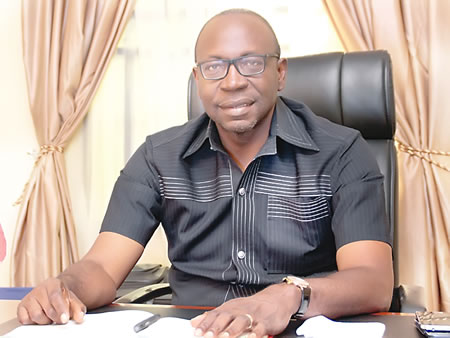 The Edo State All Progressives Congress (APC) governorship candidate in the September 19 election, Pastor Osagie Ize-Iyamu has condemned the reported non-payment of three months allowance due to the Edo State COVID-19 mobile screening team by the state government.

The team which is made up of nurses had staged a protest yesterday in Benin City, denouncing the state government for its failure to pay their allowances for three successive months and abrupt dismissal of the program without settlement of the outstanding bills.

In a statement signed by the Director of Communication and Media of his Campaign Organization, Mr John Mayaki, Ize-Iyamu described the actions of the Edo State Government towards the “patriotic” screening team as “callous, inhumane, and unacceptable” especially amid allegations of the governor’s alleged 15 billion naira payment to the PDP for its primaries and ticket.

He demanded immediate payment of the allowances alongside a public statement of apology by the state government and reassured the screening team of his solidarity and support to ensure that all their demands are met without any retributive actions.

Mayaki described the nurses as patriotic citizens who carried out an important assignment at great risk to their own personal health, which proved crucial in the fight against the viral disease in the state.

While noting that subjecting the team to such indignity and inhumane treatment was saddening and extremely disappointing.

He said: “While his new-found allies in the PDP celebrate a new dawn of cash supply from questionable sources, responsible and dutiful workers on the payroll of the state such as the COVID-19 mobile screening team are left unpaid in the middle of an economic disruption that has caused a price hike in the cost of basic goods.”

“It is another sad episode reflective of the Obaseki-administration’s heartlessness and irresponsible prioritization of politics over the welfare of the people. Even as he continues to double down on doubtful claims that his administration has spent billions on the management of COVID-19 in the state without any accountability, the people have voiced loud dissatisfaction with all government interventions.”

“While we demand the immediate payment of all allowances due to the mobile screening team with an attendant public statement of apology to them and other members of the public for the government’s insensitivity and callous treatment, we wish to express our solidarity with the protestors as they struggle for what is rightfully theirs and convey our commitment to ensure that all their demands are met quickly and without retributive actions feared by some with knowledge of the tyrannical tendencies of the Obaseki-administration.”

JUST IN: Africa Cup of Nations postponed until 2022