IWPG marches for peace along with Indian women 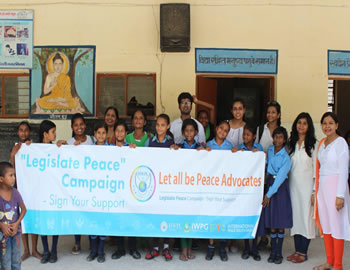 A Marching Ceremony for the Cessation of Wars,co-hosted by International Women’s Peace Group (IWPG) and Apne Aap Women Worldwide-Indian Branch, received a boost at MCD Primary School, Delhi, as over 150 students from MCD Primary School and Goodwill Public School attended the day’s event with a number of women from Najafgarh, India, while influential social worker, Bindiya HIV/Aids related programme organizer, who has reputations as active peace worker also attended the event to support peace movement.

Even, the scorching Sun of India could not hamper people eager for world peace, as the event was hosted as an extension of the “3rd Annual Commemoration of the Declaration of World Peace”, which simultaneously was held in 52 national branches on the 25th of May.

On the very day, 500,000 people globally participated in the peace walks to urge and support for the Declaration of Peace and Cessation of War (DPCW) aiming at the implementation of international law that is expected to cease all conflicts.

Before the Peace march in Delhi, Chairperson Nam Hee Kim of IWPG delivered a short video message to congratulate.

In his message, she said “Signature campaigns in support of the Declaration of Peace and Cessation of War we are currently carrying out will bring forth a paramount change to humanity.” and added “Existing international law could not prevent any wars, but International law committee members, including former and current heads of state around the world, have acknowledged that it is only this Declaration that can guide the way and bring about the end of wars worldwide.” She also said “Our small actions can change the entire world. The biggest beneficiary of the cessation of war will be all mankind.”

MCD Primary School marked the beginning of peace march. Bindiya said “Women and Children who are regarded comparatively vulnerable, gathered for this peace campaign, and through it they were able to have right recognition of peace, and became interested in conflicts including the one in Pakistan and other countries. I hope that more schools and citizens of India can join this movement. ”

Opening Ceremonies of HWPL Peace Advocacy Committees took place in New Delhi, Hyderabad, Mumbai henceforth the Proclamation Ceremony of the Declaration of Peace and Cessation of War (DPCW) on 14 March 2016. The Signing Campaigns for DPCW have been actively taking place at various places including Modern School, Great Valley School, Samsara Global School, Noida International Collge, and other non mentioned schools.  As the result, over 15,000 pledges were gathered in India alone.