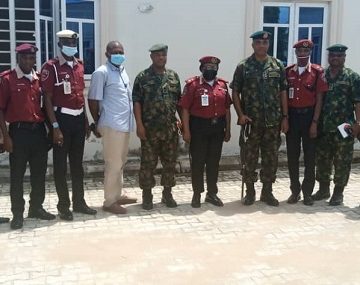 The Commanding officer 6 Brigade, Nigerian Army, Jalingo in Taraba State, Brig-Gen H. I Mabeokwu, on Tuesday, commended the Federal Road Safety Corps (FRSC) over effective collaboration with the army and other security formations in the country.

Mabeokwu disclosed this when he paid a courtesy call on the Sector Commander, Taraba FRSC Sector command, Corps Commander Selina Williams in Jalingo.

“I want to commend FRSC for remaining steadfast and connected to its Corps’ mandate in its rigid form hence the sustained success story over the years which also revolves around national security.

“I wish other security outfits will copy the Corps to reduce unproductive rivalry that has further complicated the security situation in the state and the nation at large,” he said.

Mabeokwu solicited continuous cooperation between security agencies and critical stakeholders with a view to consolidating on the gains made in improving the security situation in the state.

Responding, the Sector Commander pledged the readiness of the corps collaborating with sister security formations at all times to achieve peace.

While congratulating Maboekwu on his appointment, Williams commiserated with the Nigerian Army over the demise of Late Lieut. Gen Ibrahim Attahiru and 10 others, who recently lost their lives in a plane crash.

In spite of the huge investment in the water sector by the government and international organisations, water scarcity has grown to become a perennial nightmare for residents of Abeokuta, the Ogun State capital. This report x-rays the lives and experiences of residents in getting clean, potable and affordable water amidst the surge of COVID-19 cases in the state…  Insecurity: Army lauds FRSC over collaboration

The Lagos-Ibadan railway was inaugurated recently for a full paid operation by the Nigerian Railway Corporation after about a year of free test-run. Our reporter joined the train to and fro Lagos from Ibadan and tells his experience in this report… Insecurity: Army lauds FRSC over collaboration