INEC presents Certificate of Return to Bello as governor-elect 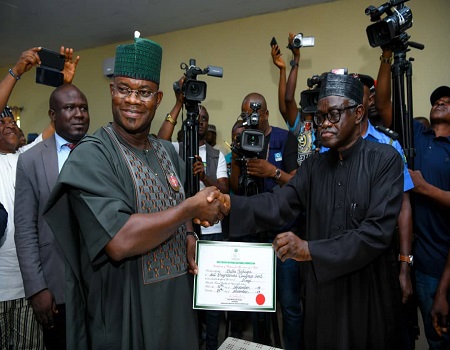 Governor Bello defeated his closest rival, Musa Wada after polling a total of 406,222 votes against 189,704 votes polled by Wada.

The certificate of return was presented to the governor and his deputy by the INEC National Commissioner, Mohammed Kudu Haruna at the Kogi State Headquarters of the commission in Lokoja on Thursday 21 of November.

Governor Bello in his remark thanked the good people of the State who supported and voted for his candidature, noting that such an event would not have been a reality without them.

The Governor called on all citizens and stakeholders in the state to join him in consolidating on his administration’s first term gain.

He pointed out that there were cases of violence recorded before, during and after the election which security agencies had been charged to get those culpable to justice

The Governor again condoled with families of those who lost their lives in these events of violence noting that his administration stood against any act of criminality irrespective of its perpetrators.

Governor Bello promised that his administration would consolidate on its first term achievements and similarly fulfil its promises of doing more for the electorates.

While he dedicated the victory to his mother, Hajiya Hawawu Bello, Governor Bello thanked the election Umpire, security agencies and other well-meaning stakeholders who ensured the success and peaceful conduct of the process.

Presenting the certificate to the Governor and his Deputy, Mr  Haruna Kudu Mohammed thanked all stakeholders who participated in the polls for their cooperation.