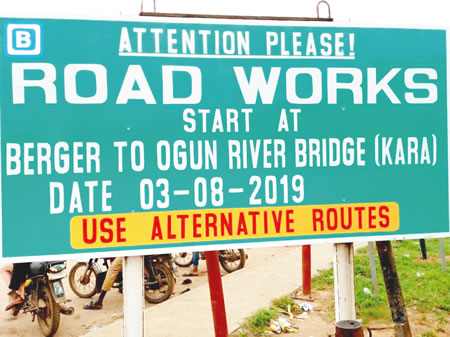 Haulage operators have warned that if the Berger to Ogun River section of the Lagos-Ibadan expressway that is set to be repaired is allowed to become chaotic through traffic gridlock, then it could affect the haulage rates being paid by importers for movement of containers from the seaports up North.

Speaking to the Nigerian Tribune exclusively, Chairman, Dry Cargo Section of the Nigerian Association of Road Transport Owners (NARTO), Alhaji Inuwa Abdullahi, stated that the Berger to Ogun River route is the only axis truckers ply when carrying containers to destinations outside Lagos, from Ibadan up North because other alternative routes are not motorable.

According to Alhaji Abdullahi, “The alternative roads available for haulage operators up North are not motorable. The Sagamu Link road through Ikorodu is in disrepair. The last time I passed through that axis, the road was terrible. Now that the rains have been falling, that road is a no-go for truckers.

“Also, another alternative route could have been the Sango-Ota through Papalanto to Sagamu interchange. That road too is not motorable. So, for containers going to places like Ibadan, Oshogbo up North, truckers will be restricted to the Berger axis of the Lagos-Ibadan expressway.

“Now they want to partially close that road for repairs. Government could have waited till after the Eid El-Kabir to do that because haulage activities up North always increase once it’s a week or two to the festival.

“Many cargo owners who are in the North want their consignments before the Eid El-Kabir celebration popularly referred to as ‘Ileya’ festival.

“We just hope and pray that the section of the road does not get chaotic. If it does and truckers have to spend hours or days to navigate, then it will definitely affect haulage rates. Importers will have to pay more to convince truckers to go towards that route.”

Also speaking on the matter, Chairman, Association of Maritime Truck Owners (AMATO), Chief Remi Ogungbemi urged the Federal Ministry of Works, Power and Housing to make alternative routes motorable before the Berger to Ogun River section of the Lagos-Ibadan expressway is partially closed.

In his words, “If all the articulated vehicles will have to compete with other kinds of vehicles through the proposed diversion along the Berger to Ogun River axis of the Lagos-Ibadan expressway, then there would be chaos and total gridlock on the road.

“If only that government has repaired other alternative routes before thinking of embarking on the partial closure of the Lagos-Ibadan expressway, then all articulated vehicles will just make do with the alternative routes while the regular cars and vehicles go through the diversion at the Berger to Ogun River axis.”

“I don’t know how they hope to do it, that is the traffic officials like the Lagos State Traffic Management Agency (LASTMA) and the Federal Road Safety Corps (FRSC), but allowing all articulated vehicles to compete with regular vehicles through the said diversion during this time is not the best. The Ileya festival is here, where we haulage operators get more jobs up North. How they hope to avoid a traffic gridlock is what I really don’t know.”

AfCFTA: Why Nigeria must beware of sister African states