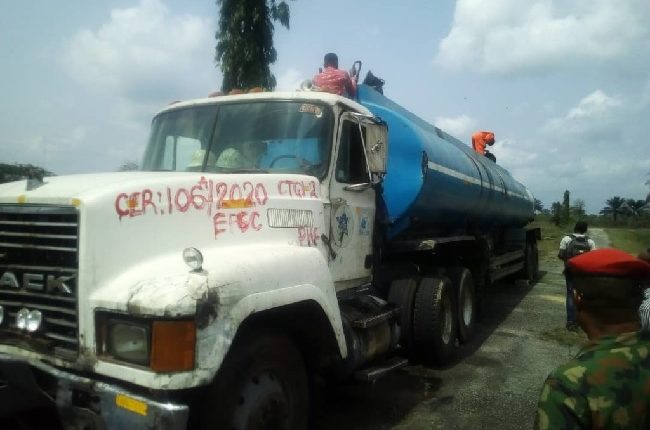 A Truck used to convene diesel extracted illegally from the riverine communities in Ovia South-West Local Government Area of Edo State has reportedly killed a man identified as High Chief Tuedor Amos, from Furupagha, an Ijaw clan in the local government.

Chief Amos was reportedly hit by one of the trucks carrying diesel illegally extracted from the riverine communities in the local government area via Siluko River bank en-route Iguobazua, where the truck knocked him down while he was on motorcycle.

Confirming the incident to journalists in Benin, a cousin to the deceased, Chief Ben Bowei, decried activities of illegal bunkers in the Siluko River axis, adding that the act had damaged the road from Siluko to Iguobazua.

He added that the whole road from Iguobazua to Siluko is slippery and had become a death trap to dwellers of the area, who according to him, ride motorcycles as a major source of transportation.

“For long, we have been warning these guys indulging in illegal bunkering in our river to stop their activities, but they refused, now bunkering has claimed the life of a prominent chief in our clan.

“Activities of these bunkers are damaging the only road rehabilitated by Oshiomhole as the diesel pours on the road while conveying it to the city. The road is so slippery that people on bikes have to be praying to God that for safety while travelling,” he said.

He called on security operatives to arrest those carrying out Illegal bunkering in the riverine communities in the area.

When contacted on phone, Police Public Relations Officer, Edo State, SP Bello Kontongs, said he was yet to be briefed.

Verdict: The viral WhatsApp voice note claim is a hoax. The content is not new and has been circulated as a broadcast message several times in the past.Illegal bunkering: Truck carrying diesel kills prominent chief in Edo