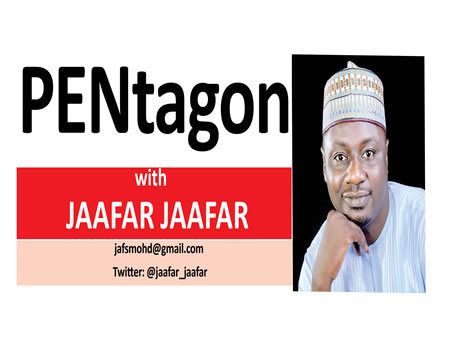 About two years ago, a certain state governor in the North, who was infuriated at the executive secretary of the state pilgrim board for allegedly sidelining his wife in Hajj contract, once lamented to his commissioners. “Since 1992,” the governor said, citing the name of the governor at the time, “First Ladies were given Hajj contracts. Why should it become an issue when my wife is involved in luggage contact?”

Although it was Hajj reform introduced by the National Hajj Commission of Nigeria (NAHCON) that year consumed the first lady’s deal, the governor soon fired the executive secretary board despite their closeness and long-term relationship.

I was forced by demand by my readers to reveal those who actually landed controversial social media activist, IG Wala, in trouble, or in a plain tone, his sponsors. Others asked me to explain whether IG Wala’s claims were actually true but failed to provide evidence to prove his case in court. On these issues, I will chronicle some curious occurrences and leave readers to connect the dots.

I have a belief that no single agency of Nigerian government that is as clean as a whistle, but for IG Wala to religiously hammer on one person without verifiable facts smacked of vendetta. Nobody will rule out corruption in an agency that awards multi-billion naira contracts, but the truth is that IG Wala picked wrong issues and a wrong man. Hajj commission is one of the A-rate agencies of Nigerian government that politicians lobby to be appointed either as the head or commissioners. Even at state level, the Hajj administration agency is the most lucrative.

Insecurity may get out of control in Nigeria —British Govt

At the state level, the key criterion for appointment of pilgrims welfare board chairmen is loyalty or closeness to the First family. I know as a fact that most Northern governors set aside Hajj racketeering kickbacks to their wives. Deals related to purchase of pilgrims’ luggage, accommodation and feeding are exclusive to the first ladies.

Before NAHCON’s Hajj reform in 2017, the accommodation fee benchmark was 4,000 Saudi Riyals per each pilgrim, although some of the facilities were in reality secured at lesser prices. This made the state Hajj managers to connive with a cartel in Saudi Arabia to inflate the fees and fleece both the state and the pilgrims. A particular case was Niger State which in 2013 paid a whopping 14,000SR as accommodation fees for each of the over 3,000 pilgrims in the state that year. Insiders said the actual cost of the facility was not more than 7,000SR per head. In this deal alone the state officials got at least N2billion “profit.”

But trouble began when NAHCON introduced sweeping reforms that threw the accommodation racketeers and FOREX round trippers out of business and abolished Amirul Hajj sponsorship. Realising that the Amirul Hajj “office” was just ceremonial as Saudi authorities were not in anyway dealing with the “office”, President Buhari abolished it.

Abdullahi Mukhtar’s tribulation was just predictable as he stepped on so many toes. Before the Hajj reform, Amirul Hajj alone smiled home with at least $1.6 million in estacode every year from public funds. In the twilight of the Jonathan administration, the Sultan of Sokoto Sa’ad Abubakar III had lobbied his way to be appointed the lifetime Amirul Hajj of Nigeria.

But Buhari’s decision hurt the monarch, who wrote letters to the president seeking reversal and even suggesting how his humungous estacode could be sourced from NAHCON – or simply put from pilgrims. President Buhari still refused.

Another source of NAHCON chairman’s problems is the fact that one of the senators investigating the  commission is a famous FOREX/BTA round tripper, who made hundreds of millions of naira every year before the reform. This particular senator was the one who raised motion for urgent public importance, seeking NAHCON boss to be investigated. The issue of increasing Hajj fare and service charges deducted by NAHCON were a red-herring the cartel latched on to advance their agenda, while the real crime was Mukhtar’s ‘biting’ reforms that made their deals practically impossible.

Like National Rifle Association (NRA) in Washington, the Hajj racketeers can go to whatever length to keep their trade afloat. The NRA, despite having in Donald Trump a gun-friendly president, did not fold its arms without lobby. A Bloomberg February report says NRA spent a record $9.6 million lobbying lawmakers and federal agencies over the last two years.

Certain Sabo Lagos (now detained by the SSS), the billionaire leader of Arewa Foundation in Saudi Arabia, is behind Island Economy, one of the firms involved in the multibillion naira accommodation deals with the Nigerian state governments.

Sabo Lagos’ company had a mere 18,000SR share capital but deals in billions. The new Hajj reforms however put the share capital for companies handling accommodation at 5million Saudi Riyals for efficiency and quality service delivery.

Basking in its riches, the Hajj cartel deployed resources to lobby senators, members of the House of Representatives, top presidency officials and media to force NAHCON boss to shelve the reforms. In the media, the cartel approached social media influencers, including my good friend, Dr Sheriff Almuhajir and I. At the senate, Senators Adamu Aliero and Abdullahi Danbaba led the battle.

When IG Wala was first detained in January 2018, and efforts to make him write a statement were unsuccessful, it was Senator Adamu Aliero who sent him a lawyer, Barrister Fatima Abdullahi, and directed him to do so.

The allegations against NAHCON by the Sabo Lagos cartel were many. Key among which, amplified by the National Assembly and IG Wala, were “exorbitant” Hajj fare, service and administrative charges.

When the Senate invited Mukhtar to explain why NAHCON levied pilgrims 50 Saudi Riyals, he told the committee at a public hearing that service charges are part of the legitimate sources of revenue to the commission as provided under Section 11 (1)a of its Establishment Act. Asked by the committee whether he sought the approval of the president before taking the decision, Mukhtar opened his folder and provided the memo he sent to the president, seeking his approval. The lawmakers prodded further, asking whether the president gave approval. Mukhtar again shuffled his folder and provided a letter showing the approval of President Muhammadu Buhari. The committee room went into a dead silence. Mukhtar then challenged his accusers to show any evidence that the money was remitted or diverted to any account other than NAHCON’s. Nobody gave the evidence. Mukhtar threw the same challenge to IG Wala when he was cross-examined at the Abuja Federal High Court.

But when it was apparent IG Wala had lost his case, a move to trade off the Senate committee report with his criminal case was made. In June 2018, IG Wala engaged a former senator, Nasiru Mantu, to give Mukhtar the choice of allowing the Senate to publish its report or drop his case, as a nominal complainant, against IG Wala. On June 25, 2018, Mantu showed Mukhtar the Senate report IG Wala gave him and presented the choices to him. But Mukhtar said the truth should be allowed to prevail in court. How did Wala get the Senate report before it was published? The answer is clear.

But why is Hajj expensive under Buhari administration? While I salute Buhari for scraping the Amirul Hajj “office” to check wastage, however I blame the president for mismanaging the Nigerian economy and allowing naira to slide into abyss of depreciation unchecked. The dollar constitutes about 98 percent component of the Hajj fare, and the commission uses the dollar to pay for all services rendered to pilgrims in Saudi Arabia. So, in actual terms, the component that determines the hajj fare is the dollar.

I can’t say the call for reduction in Hajj fare is misplaced but the call for the president to reverse the value naira to pre-2015 is better placed.

Nigeria and violent revolt of the Almajirai