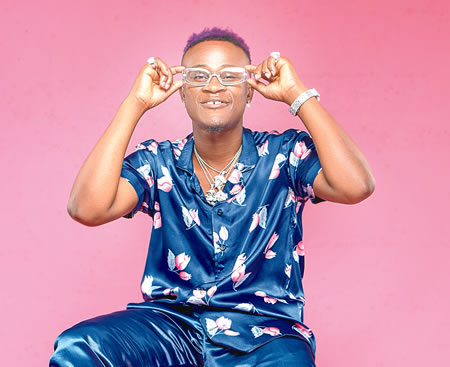 For Olatunji Oladotun Alade famously known as Dotman, music comes easy as it gets. With hit songs back to back Dotman has pushed his game to enviable heights where he feels he needs no further introduction. With his new song Owo Epo topping music charts, the Ogun State born singer in this interview with SEGUN ADEBAYO says his best moments have just begun.

Dotman is a name that has been coming for a while. How long did it take you to push through with your music?

It’s been about six to seven years coming. I am thankful for the grace and the opportunity I have got over the years. I have realised over the years that the entertainment business is no jokes for anyone who wants to make it. I think I got noticed with Yes Melo in 2015, thanks to Olamide, he helped with the projection by featuring on the remix as well. Then I got that global break through with my song AKUBE in 2016.

With different songs and tunes, you have come a long way but many people still don’t rate your game high. How do you feel?

It is what it is. Sometimes, you feel bad and sometimes it just reminds you that you have to do a lot more.  The same thing happened to Burna Boy and in due time he became everyone’s favourite artiste. I remember having the biggest song in the country in 2016 and 2017 but I still didn’t get a nomination at the so called prestigious awards. The greatest reward any creative one can wish for is true and genuine fans that would go all out for you and your music. If I can impact lives, I am fine and in due time the credits will come. I don’t get my head worried about that, I just want to keep pushing my music and running my race.

You have dropped a couple of songs that topped charts and gave you recognitions. How hard has it been pushing your game to this level?

Sincerely, it’s not beans. Ask every entertainer out there, they will tell you it is not a tea party; we all deal with several issues, from emotional, psychological, mental, family and financial issues. It is just the same everywhere. I think the real challenge for me started when I launched 808 Records. It was one hell of a ride but I am thankful there’s o much lesson to be learnt and we are still learning, life’s a journey with different turns.

Your new song, Enugbe has changed the game for you, but findings showed that you are not the original owner of the song. Could you share the story behind the song?

I don’t know about such findings. I recorded that song two years ago; I just decided to put it out this year. I have not heard anyone come out to say that.

We have heard different versions of the song but yours seems to be making the headlines and attracting attention. What did you do better than others?

There can be so many songs with similar titles; I think most importantly I just had to make the record as simple as possible so an ordinary man can relate and it making headlines and attracting I have God and my team to thank for it.

Judging by what you have been doing since the song was released and the success it has recorded, would you say 2020 is your year?

We all hope for the best each time we put out a material. No one has the formula that would provide you a hit record. This one thing I am very sure of. I remember when we put out Akube, I didn’t even know it was going to be that big that would make T Pain, French Montana, Edison Cavani, Usher and His dancers and many people around the world love the song that much despite being an afro beat sound. I am quite hopeful and positive.

In the song, you claimed that you didn’t get the much needed support that could have helped you go beyond this level. It was a subtle shade at some people. Would you mind telling us what was going through your mind then?

Honestly, I am very good with words and I play around them a lot, some part of the song had details of certain things I have been through but it’s all in the past now. I just felt some people who had the chance to be with me when I was the coolest could have also gone the extra mile for me when things went south. I know they tried but sometimes it just takes an extra effort but you know we keep learning. If some of those things didn’t happen I might never have learnt not to expect anything from anyone. Life is humbling and that’s what makes it interesting.

It was hard to believe that despite the songs you have dropped over the years, you could still be broke as you claimed in the song. What didn’t work for you those days?

I wasn’t broke (laughs), I just had a down time with no major hit song. I probably had to learn those things to be able to deal with the feeling of dealing with my issues.  I was still playing shows, going on tour and all but you know the feeling of wanting to get back on top. I have been there before, I know how it felt and I needed to go back so bad because I felt I wasn’t there long enough to make the right mark.

But the story seems to have changed now, how do you feel?

I am grateful to God that those days of persistent hard work, patience and prayers have paid off. I signed with the right management and label with strategic plans and positioning and it has been amazing. To God be the glory. I am thankful I got people behind me that can die for me.

We have seen you in flashy cars as you keep promoting your song. You seem to be living large now or is it just ‘audio money’ as they always say?

I am doing well my brother in “Mr Macaroni’s voice” Like I said, the grind is crazy but we push. There’s no room to slow down or stop.

You have been hooked in the US since the pandemic started, how has this affected the push for the song and even its promotion?

I won’t lie It has slowed certain things down; we have had to be innovative back to back. Generally, I wish I was back home, I would have connected with my people more but regardless  this lock down period has given time to actually rest because I know when all of these is over, there will be too much to do but regardless we still working and we are not slowing down.

You are now with Labo Entertainment record label. How did you seal the deal?

Labo Entertainment has always been family even before I got my first hit song, so It was more or less like the family looking at ways to push things forward. We have always been in contact and then Enugbe dropped, I think three weeks after he then decided to seal the deal.

A lot is coming, fire after fire. My debut album is coming and that’s the one driving me crazy at this point. Watch out for it, it would be mad.

Nationwide curfew: Our businesses are under siege