I found love at a tender age – Chanel Ayan

Entertainment
By Segun Adebayo On Oct 1, 2019 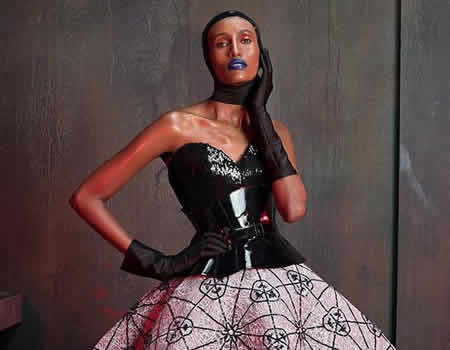 Not many people making a living in the limelight and the high street of entertainment have cheery stories to tell about love, marriage and family. For Kenyan Dubai-based number one and first black model, Ayan Pillott, famously known as Chanel Ayan, the story is as enchanting as it is fairytale-like. For the best part of 20 years of her life, she has really known only one man, married the man, had a son by him and have been living together ever since.

“I’m married and I’m very proud of that because it was my first love and the only person I have ever been with. I met him when I was 17, he was 22 and we got married and have been living together for 20 years. We have a 14-year-old boy that also models, does a lot of campaigns in Dubai. Yes, I know a lot of models that can’t keep relationships, they have many opportunities, meeting different people, so, it kind of make it easy not to keep relationships,” Chanel Ayan revealed in an interview when her opinion was sought on why many showbiz people, particularly models, find it difficult to find love and keep it.

“Sometimes, it just doesn’t work for people because it’s not meant to work out,” Ayan continues. “Another thing is some people give their hearts and believe happiness will come from there but that is not reality, the reality is you need to find happiness in you and when somebody gives you the happiness you appreciate the happiness they give you back. I believe in love. I have kept all my love this 20 years, I have kept my kid knowing his mum and dad, compared to how I grew up, that makes me really proud of the other person, to show my kid there are better people and people can keep their relationship intact and fight for family values and all that stuff. But that doesn’t mean I have had it easy, life is full of ups and downs but the thing is, you should be with somebody you can make your friend. My husband is kind of like my friend,” she added.

Speaking further Ayan reminisced how her wedding was such a low-key affair but nonetheless have grown blissfully over the years. She got married in Brazil after she left Kenya at the age of 17 to pursue her dream of being a name, not to be whispered but to be announced on the most exquisite of occasions.

“My wedding was the simplest wedding you can ever imagine. 15 people in Brazil, some were my friends and some were my husband’s and my wedding dress was 20 dollars. We just married and I couldn’t even speak the language at the time. My husband speaks fluent Portuguese but he’s American. For us, it was very important that we grew up together and made everything together. Like everything we have ever had is ours. I have worked hard for my stuff, he has worked hard for his stuff, all our staff is like combined together. We have a lot of properties in Dubai, In US, I own homes in Kenya. When you marry somebody you don’t marry them for what they have, you marry them because of who they. Like I always tell my son, you need to find somebody with a good heart, a beautiful heart and to never look for anything else. So, I’m very proud that everything we have we have made it for ourselves,” she said.

When Ayan came to Dubai 14 years ago, there was no black model in the big league. She was the first black model in Dubai and has so elegantly imprinted her name on the landscape, so much so in the whole of Middle East that her name resonates with respect as the number one in the trade.

“I have been in Vogue for more than 10 times in Dubai, the only black girl. There are other 5 girls from Nigeria who try to work here but are not given opportunities. I have always believed the way you carry yourself makes people believe in you more to see your worth and I believe as black girls we have a lot of work in us. We stand out more than anybody, like for me, I could be in a fashion show with 20 models and I would be the only black girl. And when I leave the show everybody would come back, like we really remember you because I walk with grace and confidence.

I get invited to the most amazing parties and events in Dubai, I was recently invited to Hermes and Dior, I was the only black girl at the party. And why I get invited to these parties is because I refer to myself as a goddess, like they need me to be there,” she mused.

Ayan has not only worked with biggest fashion labels and couture across the world, she has also had stints in movies. She featured in Mission Impossible, shot in Dubai, featuring Tom Cruz. She also featured in the latest Fast and Furious by Vin Diesel shot in Abu Dhabi

“I get a lot of opportunities like that, meeting famous people, like hanging out with Vin Diesel, a lot of stuff like that. I think I have many pictures of famous people I have hung out with,” she noted.

Ayan has worked with Dior, Dolce and Gabana, Chanel, Louis Vuitto, Karl Legerfield, Van Cleef and many others. Chanel Ayan is a staple at the Amato show every season.