I am the bridge to unity and development ― Atiku 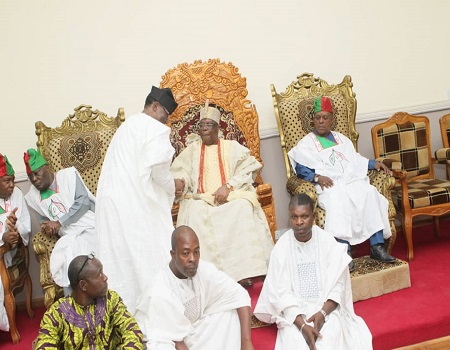 THE presidential candidate of the Peoples Democratic Party, Atiku Abubakar, has declared that he is the only candidate who can bring about the unity of all Nigerians and ensure development.

Atiku made this assertion in Ado-Ekiti on Monday when he paid the Ewi of Ado, His Royal Majesty, Oba (Dr.) Rufus Adeyemo Adejigbe, a visit in continuation of his nationwide campaign for next month’s presidential election.

According to him, “I have been taking part in the political process in this country for the past forty years and I know what it takes to make it work.

“At this point in time, we need a true democrat who can bring unity and development to the country and I am convinced I am the bridge who can deliver such.

Speaking on the need to restructure Nigeria, Atiku stated that it is ‘incontestable’.

According to him, “I have realised that restructuring of the country is incontrovertible. Unless we restructure the country, we are not going to make any progress.”

He then implored the traditional ruler to guide his people accordingly “in order to achieve our collective aim as a nation where everything works.”