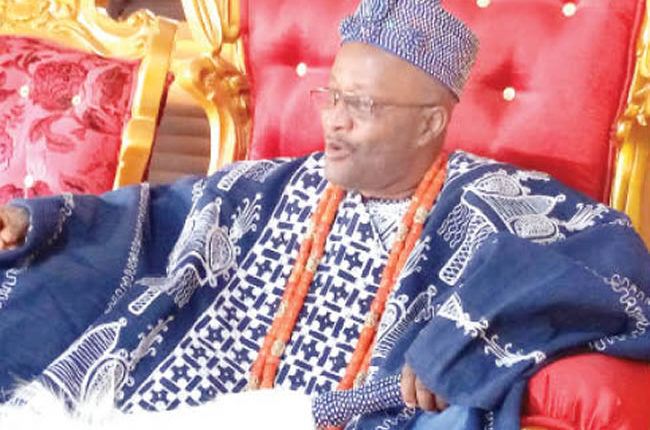 The Alawe of Ilawe-Ekiti, Oba Adebanji Ajibade Alabi was appointed by Governor Kayode Fayemi last year as chairman of the Ekiti State Council of Traditional Rulers. He tells ‘YOMI AYELESO, in this interview, about his efforts at providing responsive leadership for the traditional institution in the state, among other issues.

It has been a year since your appointment as the chairman of Ekiti State Council of Traditional Rulers. How has it been?

As royal fathers, we are very close to people in the grassroots and I ensure since my emergence as chairman of  Ekiti State Council of Traditional Rulers  to see that traditional rulers  in the state harness the nearness to the people in assisting  government in the  area of security. Specifically what I did was to take advantage of that in most of our meetings at the early stage; we were able to have a compilation of the security situation in the state. The security agencies in the state were obliged with the porous areas, areas susceptible to kidnapping,  the routes used with different kinds of information  on security and I can say due to our contribution and determination of the state government to surmount insecurity, we were able to nip the problem of insecurity in the bud.

I have been able to lift the council from the old perception of seeing traditional councils as decaying and moribund to being very proactive and dynamic. Our activities have been the cynosure of all eyes, not only in Ekiti but in the country as a whole and we want to continue with that trend. We have young, dynamic, determined and patriotic traditional rulers now in the saddle all over the place and we want to ensure that we are very relevant in the scheme of things.

So far, what has been the contribution of traditional rulers to the state security agency network codenamed Amotekun Corps knowing full well the state is at recruitment stage?

Ekiti Council Of Traditional Rulers under my leadership has been very proactive, dynamic and forward-looking. For instance, we contributed towards the Amotekun initiative and don’t forget that when it was launched, the only traditional rulers present at the ceremony in Ibadan were the Ooni of Ife, Oba Adeyeye Enitan Ogunwusi (who is the father of all  traditional rulers in Yoruba land ) and my humble self. We contributed immensely to the launch of Amotekun and when there were some issues, we rose in the midst of that initiative and I spoke extensively on the need for the Federal Government to allow Amotekun to be and at the end of the day, the Federal Government agreed that Amotekun should be given the  opportunity .

Coming back home in Ekiti, I have made substantial contribution towards Amotekun initiative in the state on behalf of the traditional rulers. During the launch in Ekiti, after the governor signed the bill into law, people were present to deliberate on the focus in a way that it would be our pride, how it would live up to expectation,  especially recruitment and deployment.

Will you say the traditional rulers are getting the expected welfare packages and recognition from the state government?

Our traditional rulers are well taken care of and I appreciate the governor of Ekiti State, Dr John Kayode Fayemi for being  proactive, compassionate, considerate and for his understanding as regards issues affecting traditional rulers in the state.

What is the state of things now as regards the crisis that erupted over your appointment?

I want you to understand that it’s a family affair. I appreciate my colleagues – all traditional rulers in Ekiti State for the support they have given me in the last one year. We have resolved our differences. I can assure you since then we have been working together, I carry everybody along. I have the utmost regard for all the traditional rulers.

Do you think the recent efforts of the state government in granting autonomy to communities will enhance development at the grassroots?

It is part of the commitment of government to ensure that development occurs in these communities. What is permanent in life is change and most of our communities have been agitating for change for quite a while. Government in its magnanimity set up Justice Aladejana panel of inquiry to look into it; the panel submitted its report, the government was able to look into the report and those with merits were granted autonomy. It is a plus for my tenure; the first one year of my tenure, we were able to douse tension in our various communities, granting those desirous of autonomy and even in addition to that some of our Obas were elevated to the next grade, some to first class and some to second class. When I was made the chairman of the council, I made it clear that every traditional ruler is important and that I was not going to object to the elevation of any traditional ruler. In consonance with that commitment, I am happy that the government has been able to do that; our communities are better for it.

How do you think some aspects of our culture can be preserved from going into extinction?

Unfortunately, we are living in very perilous times. The coronavirus pandemic has made it a little bit difficult for us to intermingle, to interact and even have some of our festivals celebrated. But the fact that things are easing up now means that we can continue to make people realise the importance and relevance of African culture and tradition. If not for COVID-19, we had plans to even travel outside. I was making that plan for some of our obas to travel to the Caribbean and some South American countries. This was for us to be able to showcase our culture, customs and tradition.

While I was in the foreign Service, I served in the Caribbean and other countries; People are so much in love with African culture and tradition. I had it planned that we would be able to visit them, educate them, showcase our culture, customs and tradition, but unfortunately it was aborted by the pandemic. I still have it in mind that as soon as we ease up all these lockdowns and things associated with COVID-19, we will be able to project African tradition not only in Nigeria but outside the country.

There is a ban on celebration of festivals and cultural events in the state at the moment as part of ways to curb the spread of COVID-19. Don’t you have the fear that the inability to celebrate some of these festivals may have negative impact on communities?

It is part of the precautionary measures put in place by government that people should suspend some of these festivals until the coast is clear. In fact, before the government issued that directive, I had had interactions with all traditional stakeholders, and in Ilawe Ekiti which is my domain, I sensitised people that in view of that, we would scale down festivities this year.

For instance, the Olofin festival in Ilawe is an oba’s festival, an annual festival associated with some rites that must be performed. The other aspect are the festivities. The deepest aspect of that festival is the rite. I performed those rites quietly without attracting attention because it is mandatory, statutory, traditional and annual. If you are performing a rite and you are just about two or three there,  you will surely maintain physical distancing, unlike in the past when the crowd would be attracted and whereas this thing could be performed quietly without undue attention.

What is your take and to what extent are the traditional rulers working on the call by Yoruba leaders that power should return to the South-West in 2023?