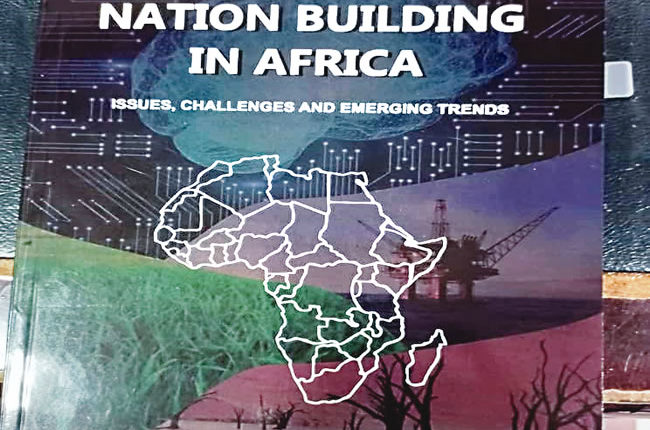 The first section of the book (Section A) is an overview with a single chapter that details an explanation of the concept of nation building, especially as it relates to Africa. This chapter, written by Obi Iwuagwu, who also doubles as the Editor, is on the topic “Nation Building and Its Implications.”

It explores the rationale for nation building as a deliberate agenda for states. According to him, nation building remains the most viable option in the development of modern societies. He further examines the external and internal challenges bedeviling the quest for nation building in Africa, insisting that for nation building to be realised, issues relating to leadership, strong institutions and corruption must be tackled frontally. Indeed, his mastery of the issues leaves one in a position of wanting to read and know more even as he raises a plethora of issues that are quite germane to consider if African countries are to build their structures to foster national unity and cohesion.

Section B of the book focuses on the economy with two chapters. The first by Isaac ChiiNwaogwugwu discusses “An Overview of African Economies,” while, Felix Ajiola, in the other addresses the “Economies of African States Since Independence.”

While Nwaogwugwu espouses the resource curse argument, Ajiola employes the historical approach of change and continuity on the one hand and cause and effect on the other to explain the economic woes of Africa.

The third Section (Section C) of the book is made up of eight chapters with a focus on political issues relating to nation building. It includes essays by Idongesit Eshiet’s “Military in Politics and Governance,” Friday Aworawo’s “Foreign Policies of African States,” Godwin Okeke’s “Regional Organisation and The African Union,” Omon Osiki’s “Governance and Corruption in Africa,” Festus Onuegbu’s “Elections and Democracy in Africa,” Uwemedimoh John Uwanah’s “Political Domination and One-Party States,” Bernard Adinuba’s “Visionary Leadership in Africa,” and Cajetan Nnaocha’s “Colonial Rule and Its Fallouts.”

Each of these essays brings an interesting dimension in the discussion of the political implications of nation building in Africa.

The chapter on Visionary Leadership in particular using the examples of three great African leaders, Nelson Mandela, Paul Kagame and Ellen Johnson-Sirleaf argues that all hopes may not have been lost after all and that there is still light at the end of the tunnel for the continent.

The fourth and last section (Section D) of the book with six chapters concentrates on Social Issues in nation building.

The chapters emphasise both the positive and negative influences of globalisation, the diversity of Africa’s populations as expressed in different customs, languages and identities, frequent movement of persons across national boundaries, the emergence of terror groups in several parts of the continent, which has seriously hampered development, and the serious distraction that has come from the multiplicity of religious beliefs and practices, all of which have made the actualisation of nation building almost impossible.

The fact that this book has not devoted any chapter on either youth or gender development is considered a major disadvantage. Moreover, it would have been good to have included contributions from outside Nigeria for a balance.

In spite of these, the beauty of this book not only lies in its multidisciplinary approach, but in the fact that all the contributors are accomplished academics, while the various topics explored are contemporary challenges of nation building in Africa.

GIANT IN THE TROPIC OF AFRICA: Arthur Eze

Zulum, COAS, others set for presentation of book on Buratai

Understanding the writings of May Ifeoma Nwoye

The real essence of living