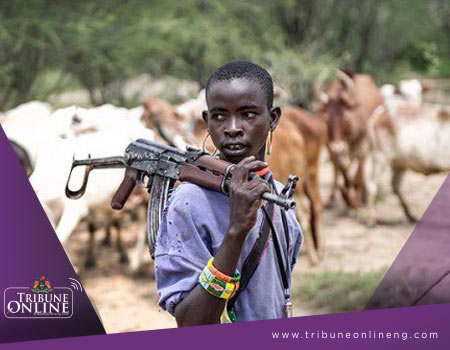 THERE was exchange of gunshots between some suspected herdsmen and policemen drafted to the farm of the former Secretary to the Federal Government (SGF) Chief Olu Falae, at the weekend, killing a farmer.

The suspected herdsmen who reportedly killed a farmer in the neighborhood of Falae’s farm, Linus Ogbeha, were said to be searching for one their strayed cows before opening fire on policemen on duty in the farm.

The herdsmen’s victim, Ogbeha, who was said to be a native of Ebonyi State, was in his farm at Ileyo Camp, an agrarian community near Igbatoro in Akure North Local Government area of the state, to collect some cocoyam for his family before he was killed by the herdsmen.

According to a resident of the area, the development had scared most of the farmers away from their farms over fear of attack from the herdsmen

However,  the killing of the father of seven, provoked a protest by non-indigene farmers, their wives, children and other stakeholders in the area, who gathered at Ileyo Camp purposely to condemn  the damage being caused by grazing of animals in the area.

The protesters armed with green leaves and placards with inscriptions condemning grazing on their farms and attendant damage to their crops, trooped out with their children, chanting anti-herdsmen slogans.

The traditional head of the community, Baale of Ileyo Igbatoro Camp, Chief Ogunleye Taiwo, who spoke with journalists said 95 per cent of people living in the area mostly non indigenes, comprising the Igbo, Agatu, Ebira, Langtang are farmers.

He said “This man that was killed had been living here for over 30 years. Chief Falae’s farm is close to us here. Our people cannot go to farm again because of the fear that the herdsmen would attack them.

“This is the time we should be spraying our cocoa farm with chemicals, we cannot go to farm. This area is the food basket of Akure, the state capital, but cattle enter our farms without restrain. We are tired of the menace of the herdsmen.

“The youths in the area had wanted to go and confront the herdsmen, we are the ones that had been restraining them because we know what that can cause,” he said.

Also speaking, the President, Coalition of Non Indigenes Associations and Chairman Agatu Farmers Association, Mr Vincent Adonyi from Benue State, said the menace of herdsmen would worsen the issue of food security if not checked.

“This is June, we do not have much maize. The cassava is not there and other food crops that we used to grow are not there because people were scared from our farms.

“Herdsmen drove some of us away from Benue and Plateau States and now that we are here, the herdsmen have come again, this is disturbing and should be of concern to the government,” he said.

Adonyi, however, called on the government to empower security agencies to deal with the situation in order not to worsen the food crisis already being experienced in the country.

He said it was the police that came to remove the corpse of the dead man and had been deposited at the mortuary and expressed hope that investigation would be done on the matter and perpetrator would be brought to book.

He said autopsy and investigations would reveal the actual cause of the man’s death, but said police from the command has commenced investigation into the matter.

Why 2023 campaigns are ethnic-based ― Falae