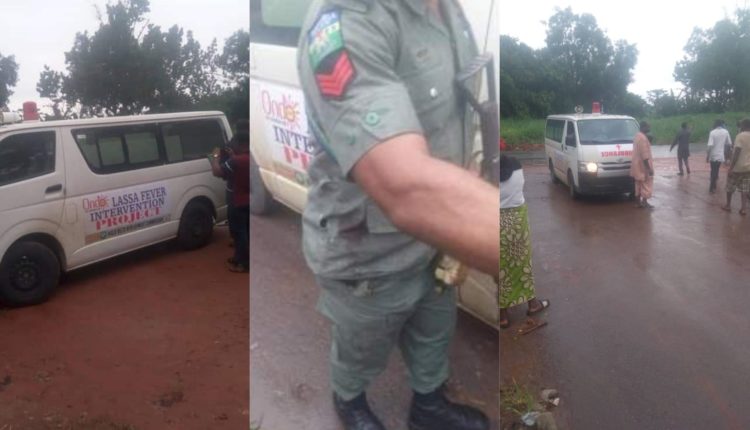 Gunmen suspected to be kidnappers, on Friday evening, attacked an ambulance conveying  drugs for the treatment of Lassa fever to Ondo State, abducting two medical personnel in the vehicle.

The ambulance which was said to be donated by the Niger Delta Development Commission (NDDC) and conveying the drugs and some medical equipments was attacked along Ondo-Edo expressway.

According to a source in the Ondo State Ministry of Health, who explained that the officials of the NDDC who were billed to meet the state government learnt of the ugly incident late on Friday evening.

According to the source who said one of the security officials in the vehicle was shot, the entourage had to meet with the governor when they waited endlessly for the arrival of the ambulance and the officials.

He said the news of the attack and abduction of two of the officials in the vehicles was relayed to them while waiting for them at the governor’s office.

He said the vehicle was abandoned with all the equipments and medicine used in treating Lassa fever while he said the injured security personnel had been rushed to a hospital.

He, however, could not confirm the scene of the incident but said ” the incident happened between Edo and Ondo State, but there was no enough information.

“They were coming to Ondo State to deliver the medical equipments and drugs to fight the Lassa fever when the incident happened and two of our men were abducted.

“The gunmen attacked our men and abducted two of them while one of the security men was said to have been shot while they left the ambulance. We have not heard anything from their abductors,” he said.

When contacted the Ondo State Police Public Relation Officer (PPRO) Mr. Femi Joseph, said the incident was carried out outside the state.