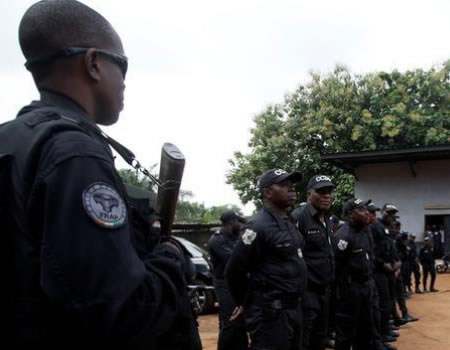 Gunmen, some of them in military uniforms, attacked the base of an elite security unit in Ivory Coast’s main city, and stole stocks of weapons as part of a series of overnight clashes, the defence minister said on Thursday.

Reuters said the raid, late on Wednesday in Abidjan, was the latest outburst of violence after months of military mutinies. It came just hours after the government reshuffled key security posts, and two days before Ivory Coast hosts an event that will bring in thousands from around the French-speaking world.

Shooting broke out at around 9.30 p.m. (2130 GMT) at the national police academy in Abidjan’s Cocody neighbourhood and lasted for around an hour, according to one Reuters witness.

The academy houses a unit of the CCDO, a rapid response unit composed of police officers, gendarmes and soldiers that is one of the best-equipped units in the Ivorian security forces.

“Last night the police school, which houses a CCDO detachment, was attacked by armed men, visibly with the goal of taking weapons,” Defence Minister Hamed Bakayoko told Reuters during a visit to the base early on Thursday.

Bakayoko, who had previously served as the minister of the interior, was appointed defence minister on Wednesday. The move was part of a government shake-up seen as an attempt to end successive waves of armed uprisings by members of the security forces demanding bonus payments.

Bakayoko said security forces had clashed with the attackers, who then fled with stolen weapons. Spent bullet casings littered the parking lot outside the CCDO base and bullet holes marked the walls inside.

Following the initial attack, a second Reuters reporter later heard sustained gunfire near the base of the police anti-riot brigade in the Yopougon neighbourhood in northern Abidjan, which also houses a CCDO unit. Bakayoko said security forces had clashed with the same group of attackers.

“We found their vehicle in Yopougon. There was an engagement between our forces and these people, and we found weaponry that was taken here (at the police academy),” he said.

Authorities were trying to determine if any arms were still missing, Bakayoko said, adding that he was not yet able to say if there had been any casualties during the clashes.

Witnesses and a police source had reported gunfire in other parts of Abidjan overnight, but the city was calm by early morning and two attack helicopters patrolled the skies.

From Friday, Abidjan will host the Jeux de la Francophonie, a 10-day sporting and cultural event expected to see the participation of around 3,000 athletes and artists from around the French-speaking world.

Children fish WW2 ammunition from pond with magnet in Germany

One dead, as knife-wielding man goes on rampage in Sydney