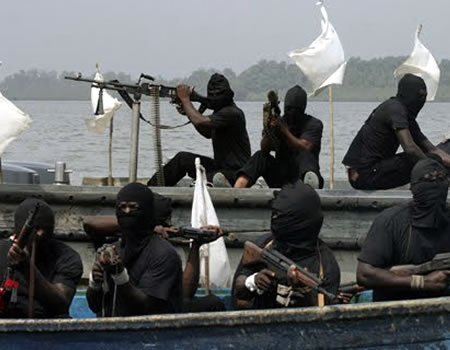 Information made available by foremost maritime security online reporting firm, Dryad Global indicates a torrid time for vessels visiting the Gulf of Guinea in recent time, as reports revealed that four vessels, MV LANA, MV ANASA, CAP DIAMANT and MV SCARABE were all attacked within a spate of two days while navigating or at anchorage within the Gulf of Guinea.

The incident, which was monitored by the Maritime Domain Awareness for Trade – Gulf of Guinea (MDAT-GoG) occurred when one speedboat with 7 attackers on board was in the vicinity of the MV SCARABE.

The ship was coming from Calabar, Nigeria when it was approached. The master started altering course and engaging in evasive maneuvers. Shortly after, the ship’s AIS was deactivated indicating the bulker was boarded. The ship’s AIS was reportedly turned on again after two hours and the bulker is said to be safe.

On the same day, another ship, Liberia-flagged tanker Cap Diamant reported being followed by an unidentified “craft” 110 nautical miles south-west of the Agbami Terminal. According to Praesidium International, the speedboat aborted the approach after a security vessel increased speed to close the gap. The vessel and crew are reported to be safe.

“Following the attack earlier today (March 25) on the bulk carrier to the south-east of Agbami, it is possible that this is the same craft. The distance between the earlier attack and this sighting also fits.

Vessels should exercise extreme caution in the area and maintain surveilance 24/7 for any small craft acting suspiciously in the area, and report to authorities any sighting,” Dryad Global had stated.

Two days later, on the 27th of March 2020 at 0230UTC, the Bulk Carrier MV ANASA whilst at the Conakry anchorage area was boarded by an unknown number of individuals.  Dryad stated that the perpetrators accessed the accommodation and removed vessel’s cash, several electronic devices and property of the crew.

ALSO READ: COVID-19: How We Have Been Coping With Lockdown, Nigerian Women Speak

In the words of Dryad Global, “Shots were fired in the direction of MV LANA, thereby forcing the vessel to increase speed and conducted anti-piracy manoeuvres to escape from the chasing sea pirates. It is understood that the perpetrators were unable to board the vessel and were seen to with-drew heading east. The vessel and crew remain safe.”

The Gulf of Guinea is the north-eastern most part of the tropical Atlantic Ocean from Cape Lopez in Gabon, north and west to Cape Palmas in Liberia. The coastline on the gulf includes the Bight of Benin and the Bight of Bonny. The islands include Sao Tomé, Príncipe, Annobon and Bioko.  The Gulf of Guinea includes several West African countries that border the Atlantic Ocean and these are Liberia, Nigeria, Gabon, Cameroon, Sao Tome, Angola, Congo Republic, Ghana, Togo, Ivory Coast and Equatorial Guinea.

The role of traditional rulers – Sanusi the genius: A case study (2)