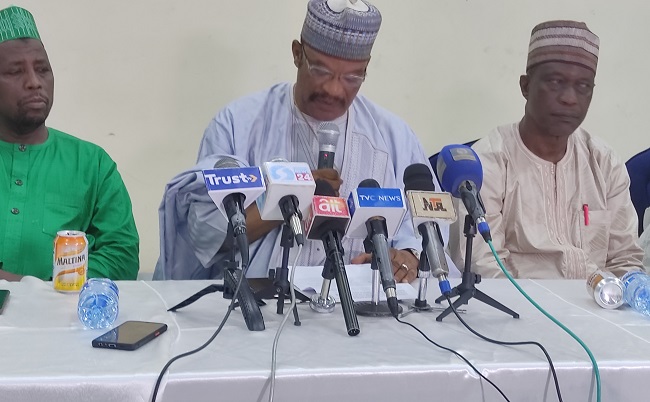 Ahead of the All Progressive Congress (APC) gubernatorial primary slated for Thursday, APC Elders in the 17 local government areas of Plateau State have dispelled the insinuation accusing Governor Simon Lalong and the leadership of the party of plotting to impose a candidate warning some stalwarts of APC in the state to desist from unguided utterance that might cause disaffection.

Addressing newsmen in Jos on Wednesday, the chairman of the APC elders in the State Professor Dennis Damis Mailafia strongly frowned at the recent political activities by some groups within the party adding that raising baseless accusations without any justification is inimical to the smooth transition of the electoral process in the state.

He frowned at a press conference addressed by a group christened “Equity and Justice Forum” alleging imposition of candidates adding that the few behind the forum acted in self-interest, not in the collective interest of the forum.

His words: But why we find it necessary to call this Press Conference today is to give a word of caution against the distraction. Firstly, we noticed how this allegation was quickly latched on by a group calling itself the Equity and Justice Forum. Many of us are also members of this noble organization but we are not aware of when meetings have been called or held.

“So far they continue to peddle the false notion that imposition was responsible for the failure of the PDP in 2015! It was not. It was the refusal of the Government of that time to stay the course of rotating power within the zones. But they say if a man’s sole inheritance is a hammer, he sees every problem in life as a nail. This is how the purported Equity and Justice Forum behaves right now. It is almost in a conspiracy to superimpose the 2015 imprint on the wonderful flourish of zoning today in Plateau State with an allegation of imposition.”

Professor Mailafia warned the general public to wary of the antics of those out to truncate the processes of electing a credible candidate for the party adding that what camouflages as a protest against imposition is nothing but politics.

“In any case, if indeed APC in Plateau State is having such an issue, it is the role we envisage for the elders’ council to mediate and reconcile and resolve the crisis or to demonstrate, beat the war drums and the soapbox to spread acrimony. If we really respect our grey hairs why are we imitating the methods of “comrades” our super active young ones? For them their excuse is that they are youthful, what is our own?”

Professor Mailafia further added that most of the aspirants who formed themselves into G18 did not purchase nomination forms to contest the primary adding that they simply picked on Dr Nentawe Yilwada Goshwe and alleged that he was the imposed candidate by the government.

He added that the governor and leadership of the party had on separate occasions addressed the aspirants assuring them that the government and party would remain neutral and also implored them to collectively resolve on a consensus candidate in order to close the gap.

In spite of the huge investment in the water sector by the government and international organisations, water scarcity has grown to become a perennial nightmare for residents of Abeokuta, the Ogun State capital. This report x-rays the lives and experiences of residents in getting clean, potable and affordable water amidst the surge of COVID-19 cases in the state…Plateau APC elders absolve  Plateau APC elders absolve