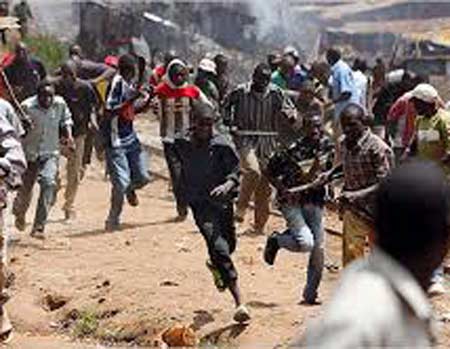 The Tiv socio-cultural group, ‘Mdzough u Tiv’ has raised the alarm of genocide on Tiv people across Benue, Taraba and Nasarawa state, disclosing that suspected herdsmen killed 12 people of Tiv origin on Monday night at Kadarko local government area of Nasarawa State.

In a swift response, Nasarawa State Police Public Relation Officer, PPRO, DSP, John Kenedy Idrisu, who spoke to our correspondent on phone confirmed an attack on Kadako village but said that only seven persons were killed by ‘unknown gunmen’.

However, the Tiv socio-cultural group raised the alarm of plan to annihilate Tiv nation the press statement issued and signed by its president general, Chief Edward Ujege which he made available to our correspondent in Makurdi on Tuesday.

Ujege lamented constant killings of Tiv people of Benue, Taraba and Nasarawa states and called on international community to intervene.

The group further said that several persons were still missing in the Kadako attack.

Ujege recalled the threat by the leaders of Miyetti Allah Kautal Hore that the crisis in Benue was a struggle for the resources in the Benue Valley alleging that the Kautal Hore vowed to invite Fulani from across the world to annihilate the present inhabitants and take over.

The president general said that Tiv communities across the three states had been attacked for more than 100 times from 2011 to date.

Ujege explained, ‘Fulani leaders set the stage for last night’s attack on Kadarko by claiming the previous day that Tiv militia from Benue state had attacked and killed 73 of their cows.

“We drew attention to the fact that this report was an obvious mockery of their brutal murder of 73 persons including pregnant women, children and old men who were accorded a mass burial on January 11, 2018.

“We also pointed out the painful, reprehensible, offensive and provocative comparison between cattle and human lives.

“The whole world is aware of the impunity of these attacks which the herdsmen openly boast about, citing the rustling or killing of their cattle.”

The group decried Federal Government nonchalant attitude towards arresting and prosecuting leaders of Miyeiitti Allah Kautal Hore which had inadvertently claimed responsibility for the attacks on Benue.

Ujege further lamented, ‘herein lies the desperation of the Tiv and several other ethnic groups in the Benue Valley who have become targets of annihilation by herdsmen with obvious backing by the federal government.

“While the killings in Benue continue, thousands of Tiv people have been
displaced in Awe, Doma, Keana and Obi local government areas of Nasarawa state.

“Apart from the enormous humanitarian challenges arising from these attacks, that of last night has compounded the situation with thousands of people fleeing their homes for fear of further attacks”.

The group called on Nasarawa State Governor, Tanko Al-Makura to give the Tiv people in his state equal treatment by taking care of the people displaced.

Ujege called on all Tiv people both within and in the diaspora as well as all men and women of goodwill to rise and intervene stressing that the Tiv race is under threat of annihilation.

Ekiti community raises alarm over destruction of farmland by herdsmen