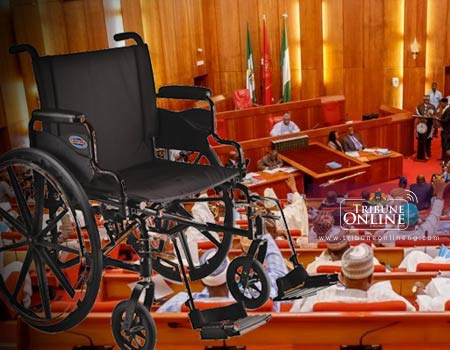 A coalition of groups of Persons with Disabilities (PWD) in Abia has advocated for legislation to protect them from discrimination, marginalisation and exclusion from governance at the three tiers of government.

Operating under the auspices of ‘Centre for Citizens with Disabilities’ (CCD), the group said that PWDs were suffering harmful practices due to the absence a legal framework to protect their interest.

Addressing journalists in Umuahia, the Executive Director of the Centre, Mr David Anyaele, noted that only seven of the 36 states of the federation had a Disability Law.

“We are agitated that one year after the passage of the Disability Bill at the National Assembly, the Joint Conference Committee is yet to conclude the harmonisation of the bill for onward transmission to the president for assent.

“PWDs in the country are often excluded from state and Federal Governments’ empowerment and job creation programmes.

“There is no record anywhere in the country to show that any PWD has benefitted from the Federal Government’s Conditional Cash Transfer and N-Power Programme.

“They were excluded from the Government Enterprise and Empowerment Programme and the Home-Grown School Feeding programme.

“Such government social welfare programmes have little or no provision for the participation and inclusion of PWDs.’’

Anyaele however, commended Gov. Okezie Ikpeazu for appointing one of their members as his aide on disability matters, but expressed dismay that the appointee was not accorded the appurtenances of the office.

“A situation whereby two individuals were appointed as Senior Special Assistant and Special Assistant to the state governor on disability matters have no office, let alone staff to do the job, is disdainful and a further ridiculing of the disabled community in Abia.

“These individuals also have no clear roles and responsibilities; they wander about from one office to the other, begging for assistance to procure materials as little as stationery.

“It is unfair to appoint PWDs into office in Abia without provision for office accommodation, equipment and other materials necessary to do the work.”

He decried the state government’s failure to sponsor PWDs to the Nigeria Farm Craft Centre for the Blind for training, rehabilitation and integration into society.

Anyaele said that government had not sent any blind person from the state to the Centre in the past three years.

“This development has led to other states taking the slot of Abia at the Centre in Lagos.”

He appealed to the government to urgently address the issue and intervene in building the capacity of PWDs, by sending them to local and international training programmes.

Anyaele further said that group was worried that the Independent National Electoral Commission (INEC) was not doing enough to remove the hindrances against PWDs participation in the electoral process.

“The non-inclusion of disability data in the registration and siting of INEC offices in areas that are not accessible to the physically challenged is worrisome.

“INEC should organise a stakeholders’ forum on disability and elections, to identify areas in election operations, to enhance effective participation of eligible citizens with disabilities,” he said.

‘My wife got married to another man without divorcing me’