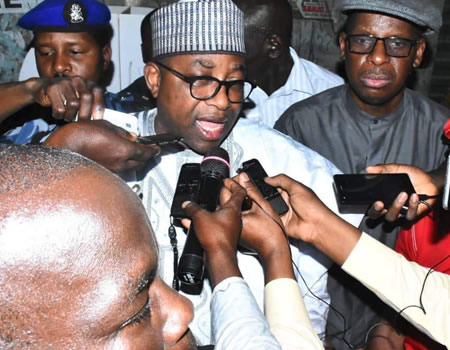 Share
Bauchi  State Governor, Mohammed Abdullahi Abubakar has commended the smooth conduct of the ongoing Governorship and State Assembly elections in the State.
Mohammed Abubakar gave the commendation Saturday at Jahun Makama Sarkin Baki 2 Polling Unit immediately after he cast his votes around 9; 53 am saying, “there is an improvement, everything is going on smoothly after we arrived, myself and my wives within few minutes we cast our votes. I want to commend INEC for that”

When asked about the turnout of voters compared with the  people who came out during the presidential election are higher than the number of people that came out today he said “you know people, some will only come out to vote for President Muhammadu Buhari others will come out for Buhari and Governor but it’s too early to assess now because election time is still on up to 2 pm”.

When further asked if he will accept the outcome of the results of the election, Governor Mohammed  Abubakar said that “I believe it’s Allah who gives power to whom he wishes and whatever Allah has decreed for us we will work with it in Sha Allah”.