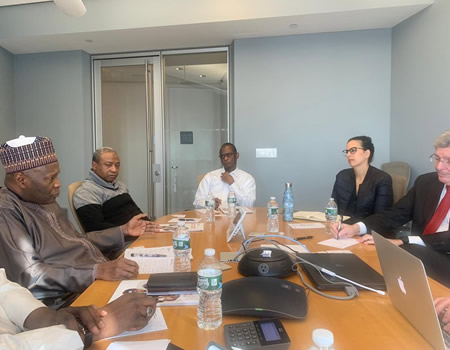 Gombe State Governor, Muhammadu Inuwa Yahaya has secured the commitment of the New York Academy of Sciences Academy to pilot its global scheme with Gombe in the areas of science and technology development as well as on strategic partnership and support in education.

This development as contained in a statement by Ismaila Uba Misilli, Senior Special Assistant to the Governor on Media and Publicity emerged when the governor visited the Academy in New York as part of his strategic engagements in the United States of America.

President and Chief Executive Officer of the academy, Ellis Rubinstein, who briefed Inuwa Yahaya on the Academy’s innovative work around providing skills to the younger generation, said that in collaboration with UNICEF and other development partners, the New York Academy of Sciences is piloting a proof of concept about the innovation in six countries including Nigeria, India, Singapore and others.

He further said that with the visit of Governor Inuwa Yahaya and his disposition, the Academy will select Gombe as the pilot state for the project in Nigeria, requesting the governor to assign a team that will engage with that of the Academy to work out the details of the intervention in Gombe State.

ALSO READ: #KogiDecides2019: We shall record zero votes in areas where ballot boxes were snatched ― INEC

He also said that the fundamental goal of the initiative will be to mobilise a global community of change agents in education, technology, and other sectors to explore disruptive innovation and build transformational skilling plans that will advance the educational foundation necessary to achieve the United Nations Sustainable Development Goals.

Ellis Rubinstein said the proposed programme elements are designed to catalyse the world’s leading experts in a wide variety of fields, as well as to encourage and monitor unprecedented public-private partnerships of organisations with critical competencies.

The governor who thanked the Academy for the warm reception and the desire to support Gombe State, directed the state Ministry of Science, Technology and Innovation to continue the discussion in collaboration with the office of the Special Adviser on Budget, Planning and Development Partners Coordination.