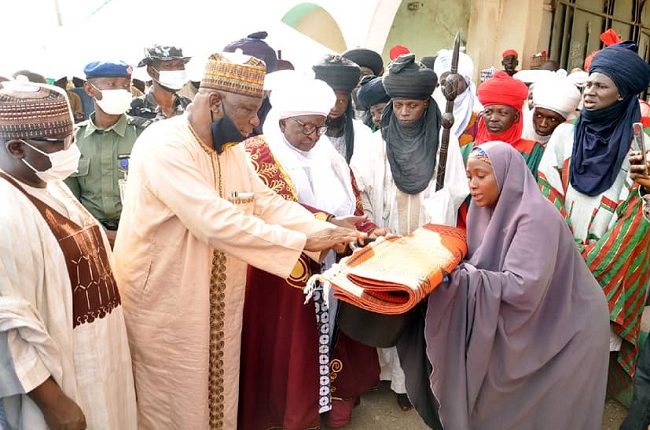 Gombe State Governor, Muhammadu Inuwa Yahaya has provided relief materials to the victims of the recent flood disaster in Nafada Local Government Area of the state.

While presenting the materials to the victims at the Emir’s palace in Nafada, the governor said that the gesture was meant to relieve the pains the victims were passing through as a result of the displacement and devastation caused by the flood.

Inuwa Yahaya who was represented by his deputy, Dr Manassah Daniel Jatau, assured that his administration will continue to carry out programmes and policies that will better the living condition of the people of the state.

He also said that a technical team of experts has been directed to study and advise the government on measures to protect the town from being washed away by the flood, expressing optimism that a solution shall be proffered towards mitigating effects of the devastation in the area.

The governor further said that while the administration is committed to controlling flood in the state, the communities and individuals should also complement government efforts by avoiding waterways while building structures and to imbibe the culture of clearing drainages so as to allow free flow of water.

Speaking earlier, the state Commissioner for Rural Development and Cooperatives, Usman Jahun Biri expressed appreciation to the governor for the prompt response by visiting the area immediately after the flood and also sending relief materials to the victims.

In his own remarks, the Emir of Nafada, Alhaji Muhammad Dadum Hamza appreciated the concern shown by the governor to the people of Nafada by dispatching various teams of experts to the community immediately after the flood on an effort towards finding a lasting solution to the problem.

He assured the governor of judicious distribution of the items and called on his subjects to continue to pray for the government to succeed and for a bountiful harvest.

Some of the beneficiaries who spoke to members of the press, including Mallam Daudu Ahmadu, Adama Mama Ila and Dada Shabiki, thanked the governor for the gesture, saying that the items will go a long way in alleviating their sufferings and providing succour for them.

They pledged their unalloyed support and cooperation to the government calling however that such gesture should be extended to all those in dire need at their period of scarcity as contained in a statement by Ismaila Uba Misilli Senior Special Assistant, Media and Publicity to the governor.