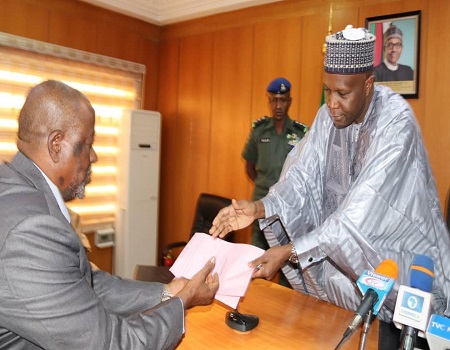 While speaking during the swearing-in ceremony held at the Council Chamber, Government House, Inuwa Yahaya congratulated the new Acting Chief Judge, who is the next most senior judge in the High Court, charging him to dispense Justice without discrimination, fear or favour.

He further said that the appointment of Justice Muazu Pindiga followed the expiration of the three months’ constitutional term for acting appointment of Justice Beatrice Iliya who is the second female to occupy that office after Justice Zainab Bulkachuwa who was the first female Chief of the state before her elevation to the Appeal Court where is the current President of the court.

The Governor thanked the former Acting Chief Judge for her meritorious service to the state and wished her well in her future judicial services.

He described Justice Muazu Pindiga as a fine and forthright judicial officer and challenged him to bring his wealth of experience to bear in the administration of Justice in the state.

Inuwa Yahaya then reiterated his administration’s desire to maintain a harmonious working relationship with other arms of Government for the progress and development of the state.

He said that he is aware of major challenges facing the judiciary even as he assured to give it fair treatment in terms of adhering to the provisions of the constitution which stipulates that the independence of the judiciary should not be compromised.

The swearing-in ceremony was witnessed by the Deputy Governor, Speaker and members of the state House of Assembly, the Grand Khadi,  the immediate past Acting Chief Judge, other Justices  of the High Court and Khadis, Secretary to the State Government, Chief of Staff, Head of Civil Service, Commissioners and other top Government functionaries as well as Emir of Pindiga among others as contained in a statement by Ismaila Uba Misilli, Senior Special Assistant, Media and Publicity to the Governor.